A two-year-old boy was swallowed and spat out by a hippo while playing near his home in Uganda.

Paul Iga was clenched in the mouth of the animal around 800 yards away from the edge of Lake Edward.

The hippo had grabbed the toddler from the head and swallowed half of his body when a local man noticed and started throwing stones at the animal.

The hippo seemed taken aback by the attack and vomited up the child — before trudging back to the water. 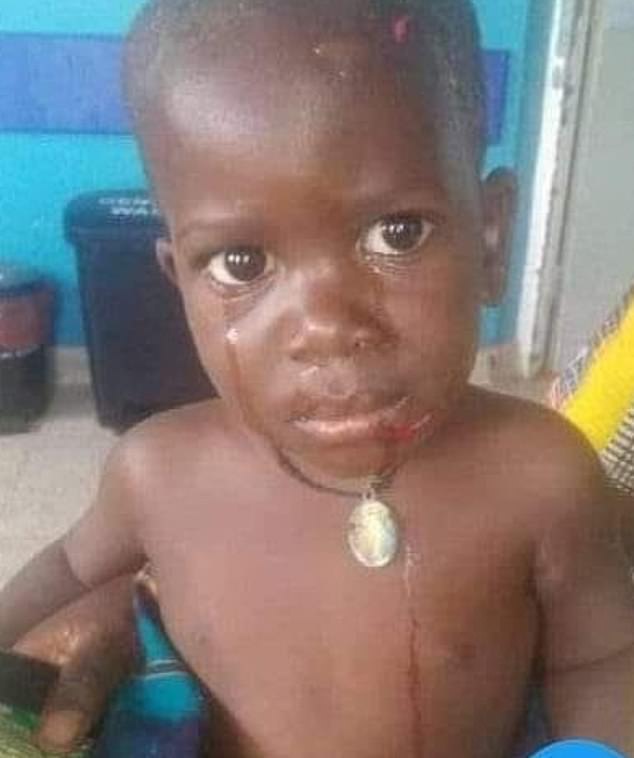 Paul Iga was clenched in the mouth of a hippo just a few hundred yards away from the edge of Lake Edward, Uganda

‘It took the bravery of one Chrispas Bagonza, who was nearby, to save the victim after he stoned the hippo and scared it, causing it to release the victim from its mouth,’ police added.

While Paul was injured and taken to a clinic for treatment, he miraculously survived.

It has been reported that the toddler was transferred to a hospital in Bwera but was sent home after taking a rabies vaccine.

In a statement, Ugandan Police said: ‘This is the first such kind of incident where a hippo strayed out of Lake Edward and attacked a young child.’

Police told residents of Katwe Kabatoro Town Council, which is located within Queen Elizabeth National Park on the border between Uganda and the Democratic Republic of the Congo, to remain vigilant around hippos.

The hippopotamus is the world’s deadliest large land mammal, killing an estimated 500 people per year in Africa, according to the BBC.

They are aggressive creatures and have very sharp teeth.

At up to 2,750kg, the animals can easily crush a human to death.

Despite their primarily vegetarian diet, the hippopotamus is extremely aggressive and territorial.

The combination of sheer size, sharp teeth and mobility both in and out of water make for a deadly mammal.

They are agile and aggressive and kill large animals and sometimes humans.

Over the years hippos have been spotted eating impala, kudu, eland, wildebeest and buffalo.

They are very protective of their habitat, normally dwelling in rivers.

In Niger in 2014, 13 people drowned when hippos overturned their boat.