The city of Winnipeg has a couple not so flattering nicknames, Windypeg and Winterpeg. The city receives Chicago like winds year round and brutally cold temps in the winter months.

But the citizens endure and make the best of it. Today was a bit milder than the previous couple weeks and people were on the river skate and walking trails. 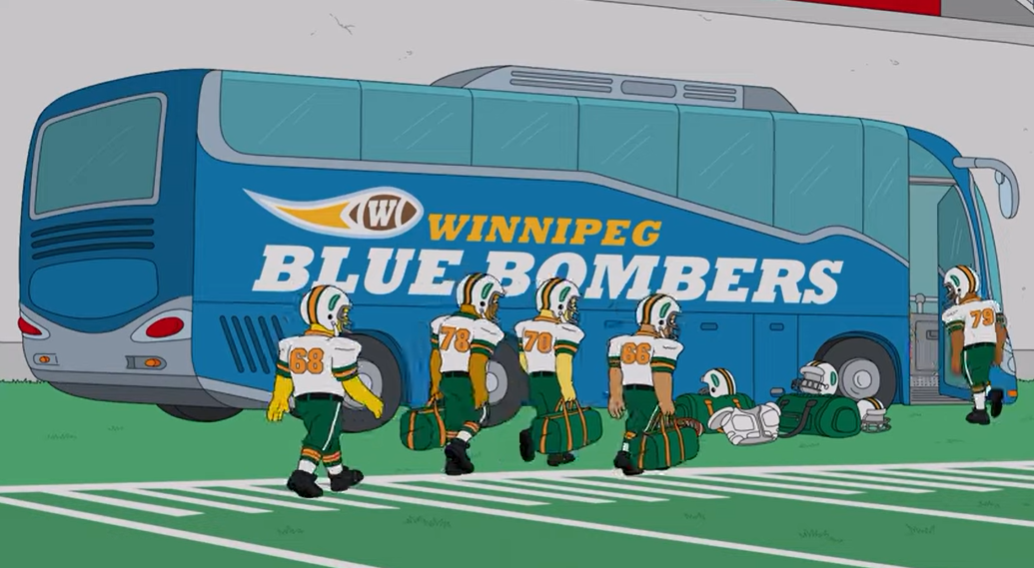 The Winnipeg Blue Bombers were referenced in a recent episode of ‘The Simpsons.’. screenshot

You may not be able to find Springfield, the home of the animated Simpson family, on a map, but the long-running cartoon’s writers certainly know where to find Winnipeg.

The acclaimed TV series referenced the city — in this case, its back-to-back champion CFL team — again in its latest episode Sunday night.

A Winnipeg Blue Bombers-branded bus makes an appearance in the episode of The Simpsons, as a group of American football players decide to try their luck up north in the CFL.

The nod to the Grey Cup champs isn’t the first time Winnipeg has been referenced on the popular animated show.

In the 1996 episode Bart on the Road, a scene featuring a disgruntled parent yelling, “That’s it, back to Winnipeg” is perhaps the best-known Winnipeg reference — but Simpsons characters actually visited Manitoba in 2005’s Midnight Rx.

The city has also been referenced frequently in films and TV series, from a nod in Alfred Hitchcock’s The 39 Steps to episodes of Cheers, The Sopranos and The Office.

Snow pyramids in Winnipeg after a 2 day snowfall.

Somebody lost a shoe.

Caught a rainbow over Winnipeg yesterday.

It was a scorching hot humid day in southern Manitoba yesterday.

The skating rink at The Forks in downtown Winnipeg opened over the weekend. Droves of people took advantage of the semi-mild temperatures (-1 Celsius) to go down the river walk and put on the skates and get some fresh air on the rink. The skating river trail will be extended down the Assiniboine and Red Rivers during the next couple weeks.

Some young kids sliding down a hill on their crazy carpets.