The Crooked Forest is a grove of oddly-shaped pine trees located near the town of Gryfino, West Pomerania, Poland.

This grove of 400 pines was planted in the village of Nowe Czarnowo in around 1930. Each pine tree bends sharply to the North just above ground level, then curves back upright after a sideways excursion of three to nine feet (1–3 m). It is generally believed that some form of human tool or technique was used to make the trees grow or bend this way, but the method was never determined and remains a mystery to this day. It has been speculated that the trees may have been deformed to create naturally curved timber for use in furniture or boat building. Others surmise that a snowstorm could have bent the trunks, however, there is little evidence of that and nobody knows what happened to the pine trees. Some hypothesize that a unique gravitational pull in this particular area caused the trees to grow curved northwards, but this theory does not hold up to basic scientific scrutiny given that gravity pulls things downward and not at a curve. The site is open to the public and serves as a notable tourist attraction in the region.

Some wake up music.

Soon I discovered that this rock thing was true
Jerry Lee Lewis was the devil
Jesus was an architect previous to his career as a prophet
All of a sudden, I found myself in love with the world
So there was only one thing that I could do
Was ding a ding dang my dang a long ling long

Ding dang a dong bong bing bong
Ticky ticky thought of a gun
Everytime I try to do it all now baby
Am I on the run
Why why why why why baby
If it’s so evil then?
Give me my time, with all my power
Give it to me all again (wow)
Ding a ding a dang a dong dong ding dong
Every where I go

Everytime you tell me baby
When I settle down
Got to get me a trailer park
And hold my world around
Why why why why?

Everytime you tell me baby
When I settle down
Got to get me a trailer park
And hold my world around
Why why why why?

I wanna love ya!

Why why why, why why darling
Do you do you tell me to play?
Half the time I talk about it all now baby
You know what I’m talkin’ about I said
Why why why it’ll
Ticky ticky ticky ticky
Son of a gun
Ding ding dong a bong bong bing bong
Ticky ticky thought of a gun

Scotland has more sheep than people. In June 2013 the sheep population was 6.57 million on about 14,800 farms, according to the Scottish government.

Scotland has 5.3 million people according to the latest Census figures.

According to the FAOSTAT database of the United Nations Food and Agriculture Organization, the top five countries by number of heads of sheep (average from 1993 to 2013) were: mainland China (146.5 million heads), Australia (101.1 million), India (62.1 million), Iran (51.7 million), and the former Sudan (46.2 million). Approximately 540 million sheep are slaughtered each year for meat worldwide.

This Liberty Mutual commercial is creative and funny. But at the end of the commercial the brief jingle makes my skin crawl. It goes Liberty Liberty Liberty, Liberty! And that is it. When a Liberty commercial comes on I have to immediately locate the remote and switch the channel before that gut wrenching jingle starts up.

Board shoe racing is the traditional sport of the Zhuang people of China’s Gunaxi province, a unique discipline that has three people sharing the same “shoes”, which requires perfect coordination and concentration.

Board shoe racing can be traced back to the Ming Dynasty, when legend has it that a famous heroine of the Xhuang people used it as a way to train soldiers against invading Japanese pirates. The legendary Mrs. Wa used long pieces of wood to teach the men to march together in perfect synchronization, which greatly improved their combat qualities and boosted their fighting spirit, helping them repel the invaders. The traditional sport has been passed on from generation to generation since then. 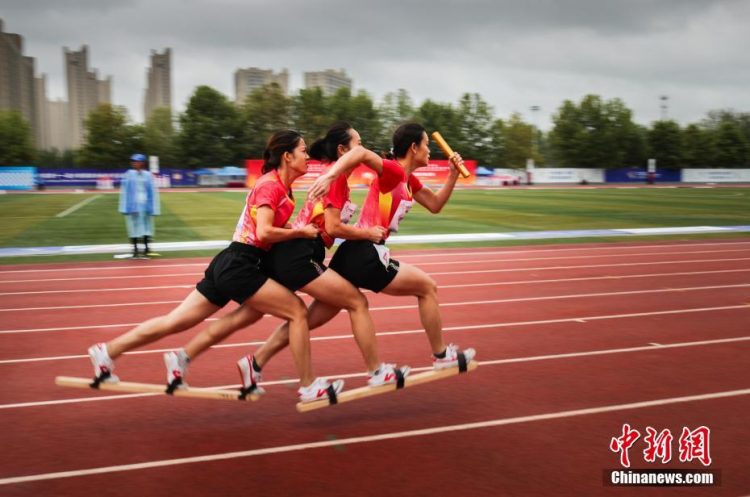 This bizarre sport involves three teammates running on the same pair of shoes, which basically consist of two wooden boards and some leather straps to fasten the feet. The boards are one-meter-long, 9cm-wide and 3cm-thick, and using them as shoes for a three-member team requires expert coordination. If one of the three pushes too hard or falls behind, they can cause the entire trio to topple over each other. 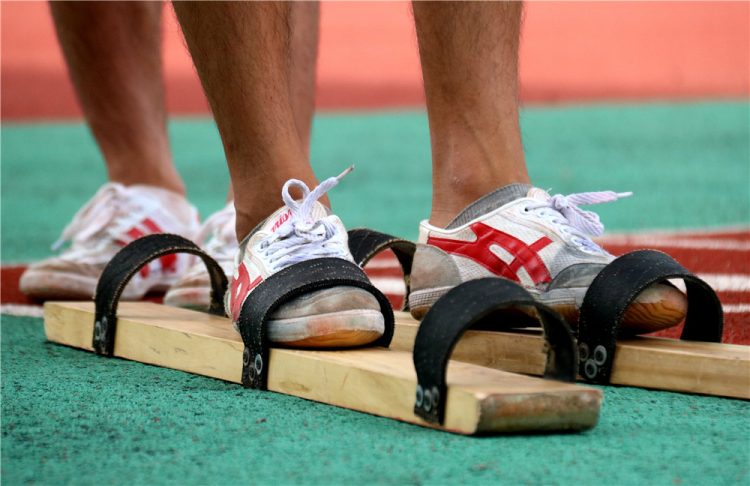 In 2005, the National Civil Affairs Commission approved board shoe racing project as an official event at the annual National Minority Traditional Sports Games. It is practiced by both men and women, particularly from the Zhuang people. 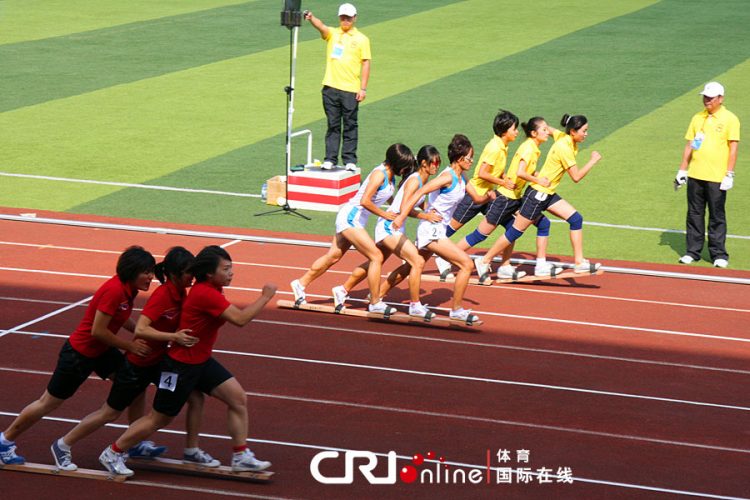 “Board shoe racing is a true team sport, and coordination is the most important requirement,” Liu Jianxin, head coach of the Henan board shoe racing team, told Henan Daily. “In addition to improving physical fitness and speed training, it is more about enhancing the team members’ tacit cooperation to the highest it can be.”

The Gloster Meteor was the first British jet fighter and the Allies’ only operational jet aircraft during the Second World War. The Meteor’s development was heavily reliant on its ground-breaking turbojet engines, pioneered by Sir Frank Whittle and his company, Power Jets Ltd. Development of the aircraft began in 1940, although work on the engines had been under way since 1936. The Meteor first flew in 1943 and commenced operations on 27 July 1944 with No. 616 Squadron RAF. Nicknamed the “Meatbox”, the Meteor was not a sophisticated aircraft in its aerodynamics, but proved to be a successful combat fighter.

Several major variants of the Meteor incorporated technological advances during the 1940s and 1950s. Thousands of Meteors were built to fly with the RAF and other air forces and remained in use for several decades. The Meteor saw limited action in the Second World War. Meteors of the Royal Australian Air Force (RAAF) fought in the Korean War. Several other operators such as Argentina, Egypt and Israel flew Meteors in later regional conflicts. Specialised variants of the Meteor were developed for use in photographic aerial reconnaissance and as night fighters.

No. 616 Squadron RAF was the first to receive operational Meteors: a total of 14 aircraft were initially delivered. The squadron was based at RAF Culmhead, Somerset and had been previously equipped with the Spitfire VII. The conversion to the Meteor was initially a matter of great secrecy. Following a conversion course at Farnborough attended by the squadron’s six leading pilots, the first aircraft was delivered to Culmhead on 12 July 1944. The squadron and its seven Meteors moved on 21 July 1944 to RAF Manston on the east Kent coast and, within a week, 32 pilots had been converted to the type.

The Meteor was initially used to counter the V-1 flying bomb threat. 616 Squadron Meteors saw action for the first time on 27 July 1944, when three aircraft were active over Kent. These were the first operational jet combat missions for the Meteor and for the Royal Air Force. After some problems, especially with jamming guns, the first two V1 “kills” were made on 4 August. By war’s end, Meteors had accounted for 14 flying bombs. After the end of the V-1 threat, and the introduction of the ballistic V-2 rocket, the RAF was forbidden to fly the Meteor on combat missions over German-held territory for fear of an aircraft being shot down and salvaged by the Germans.

No. 616 Squadron briefly moved to RAF Debden to allow USAAF bomber crews to gain experience and create tactics in facing jet-engined foes before moving to Colerne, Wiltshire. For a week from 10 October 1944 a series of exercises were carried out in which a flight of Meteors made mock attacks on a formation of 100 B-24s and B-17s escorted by 40 Mustangs and Thunderbolts. These suggested that, if the jet fighter attacked the formation from above, it could take advantage of its superior speed in the dive to attack the bombers and then escape by diving through the formation before the escorts could react. The best tactic to counter this was to place a fighter screen 5,000 ft above the bombers and attempt to intercept the jets early in the dive. The exercise was also useful from No. 616 Squadron’s perspective, gaining valuable practical experience in Meteor operations.

In March, the entire squadron was moved to Gilze-Rijen and then in April, to Nijmegen. The Meteors flew armed reconnaissance and ground attack operations without encountering any German jet fighters. By late April, the squadron was based at Faßberg, Germany and suffered its first losses when two aircraft collided in poor visibility. The war ended with the Meteors having destroyed 46 German aircraft through ground attack. Friendly fire through misidentification as Messerschmitt Me 262s by Allied anti-aircraft gunners was more of a threat than the already-diminished forces of the Luftwaffe; to counter this, continental-based Meteors were given an all-white finish as a recognition aid.