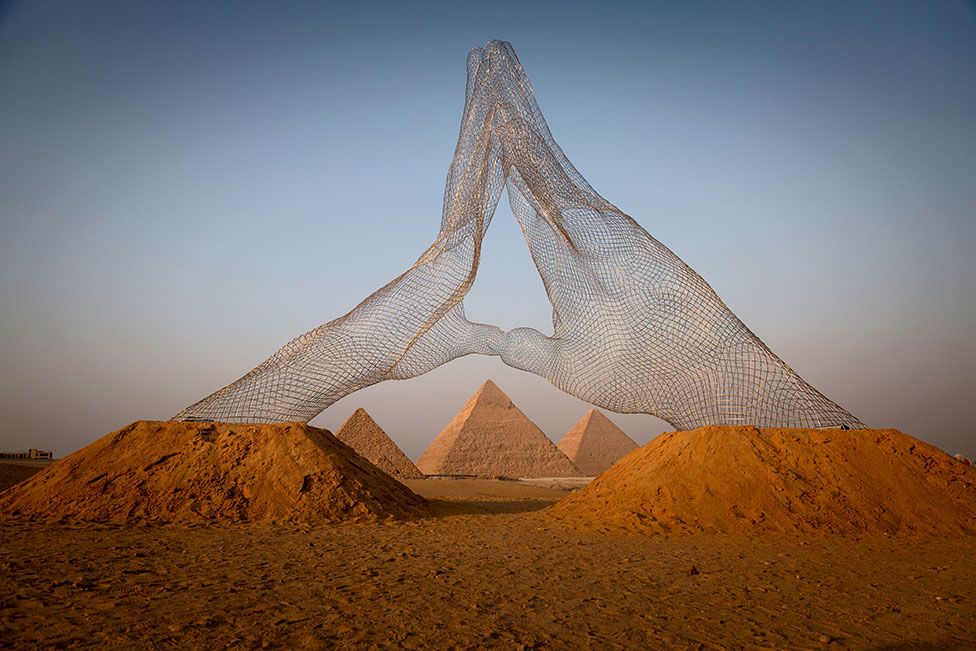 IMAGE SOURCE,SIMA DIAB / GETTY IMAGES Image caption,An installation entitled Together, by Lorenzo Quinn, is displayed close to the Great Pyramid of Giza in Cairo. The exhibition, Forever Is Now, features sculptures around the Giza plateau, with works by Egyptian and foreign contemporary artists.

A photographer has captured a “mind-blowing” view of a full double rainbow from a Peak District summit.

Danny Shepherd took the photos from Mam Tor in Derbyshire at about 07:50 BST on Sunday.

He described the view over the village of Edale as a “one in a million colour party”, which lasted for about 20 minutes.

Mr Shepherd, who has been taking pictures in the national park for 20 years, said the view from the hilltop was always amazing, but said this was the first time he had seen anything like this.

“I’ve not seen a rainbow cover Mam Tor this way before,” he said. “[It was] pretty mind-blowing actually, to see both ends and it cover Edale.

“Mam Tor always delivers amazing views at sunrise but this was a first for a complete rainbow above us.

“I do a lot of Peaks photography so when this happened, I was like a kid in a sweet shop.”

Paul Mullins saw the same full rainbow from Winnats Pass and said it was an “incredible surprise”.

He said: “As soon as I saw it, I had to capture the picture.

“I’m a keen hiker – I got up early to set off from Barnsley to make it in time for sunrise.

“I was hoping for a good sunrise, which I got, but the rainbow was an incredible surprise.”

Superheros turning into zombies. God help us all!

U.S. B-52 bomber flying over Paris

On top of One World Trade Center, 1,700 feet above the street

City’s attempt to cut Texas man’s grass leads to a standoff, a fire and his death, police say

A SWAT officer shot the man after he exited the home with weapons in his hand, according to police in Austin.

An attempt by Austin, Texas, officials to serve a search warrant and provide lawn care resulted in shots fired, an hourslong standoff, a house fire and a death, police said Wednesday.

Police officers and code enforcement officers arrived at a home at 9:16 a.m. to serve a nuisance search warrant, but could not make contact with the resident, Austin Police Chief Joseph Chacon said at an evening news conference.

The warrant was left at the door and contractors for the city’s code enforcement began working on the lawn. About an hour later, the resident started shooting from inside the house, Chacon said.

“And they immediately backed off. They got all of the staff that was working on the house to safety and and a SWAT call was initiated for a barricaded subject,” he said.

SWAT, mental health officers and a crisis negotiator arrived on scene, but could not get the man out of the home, leading to the lockdown of a nearby elementary school and the closure of several streets.

“SWAT spent the next several hours trying to negotiate with the individual to just simply come out of the house,” Chacon said.

At about 3 p.m., the resident started shooting at officers again. “And because of that immediate threat … they made entry using a robot,” Chacon said.

The robot helped officers determine that a fire had been started in the home, and was quickly spreading, he said. Officers still couldn’t get the man to come out of the house as it became fully engulfed in flames.

But then the man exited through the garage with weapons in his hand. “At that time, a SWAT officer shot and struck the resident who went down with a gunshot wound,” Chacon said.

Officers got the man away from the house and treated him before he was taken to a hospital, where he died. It’s unclear what caused his death.

The fire was eventually put out, and the school lockdown was lifted.

The SWAT officer who shot the man will be put on administrative duty during investigations into the incident, Chacon said. The officer has been with the department for eight years, according to the chief.

The resident of the home has not been identified. Austin Police spokesperson Jose Mendez said he was a white man in his 50s.

Mendez said the department had made previous welfare visits to the home, but were never able to communicate with him. Officers were in touch with his family during Wednesday’s standoff.

Their main goal Wednesday was to get the man in compliance with the local homeowners association.

“They attempted to cut the lawn for him, and this is the reaction they got,” Mendez said.

Standing at 33 Thomas Street in the Civic Center neighborhood of New York City is a 550-foot tall monolithic, granite-clad, concrete building. Even in a city like New York, where tall buildings are typical, people passing by would look up to gaze at this intimidating structure —their attention drawn not by the building’s height but by its fortress-like appearance. Aside from a couple of ventilation openings on the sides, the building’s bare concrete slab façade is without a single window.

The Long Lines Building is owned by the multinational telecom company AT&T, and is indeed an impenetrable fortress. When it was built in 1974, AT&T asked architect John Carl Warnecke to design a structure that could withstand a nuclear blast and protect its occupants from fallout for up to two weeks after the attack. Such concerns were not uncommon at that time, and AT&T wanted to be sure that their expensive equipment stayed undamaged.

The building was originally built to house AT&T’s solid-state switches and other equipment for the company’s long distance telephone lines, hence the name Long Lines Building. These switches required a high level of security and space, so the floors of the building are taller than average. Each floor is 18 feet high, so even though the building is as high as a 40 story tower, it has only 29 floors. The floors are also designed to bear an extremely large amount of weight.

The building continued to function as AT&T’s long distance telephone exchange until 1999. After that AT&T vacated the building and moved a few blocks away. The building is still used for telephone switching by some local exchange carriers, but some of the space is also used as a high security datacenter.

Since AT&T moved out, the building has been referred to by its street address 33 Thomas St., like many major New York City commercial buildings.

Shops, restaurants and schools have shut in Moscow in a partial lockdown, as Russia battles record Covid deaths and infections.

Only essential shops like supermarkets and pharmacies are allowed to open in the capital, while food outlets are only providing takeaways.

Authorities have also given workers across Russia nine days off from Saturday in a bid to curb infections.

Russia has reported a record 1,159 deaths from Covid in the past 24 hours.

The official data also reveals 40,096 new infections in 85 regions of Russia – another record. Russia’s last major lockdown was in May-June 2020.

Last October however the state statistics agency Rosstat calculated the Russian Covid death toll to be above 400,000 – far higher than the government figures.

The proportion of Russia’s population fully vaccinated remains low – on 23 October it was 32.8%, Our World in Data reports. Most European countries have much higher rates.

Despite an intensive state vaccination drive, many Russians remain suspicious of the Sputnik V vaccine, which is internationally recognised as an effective shield against Covid.

Faced with this partial lockdown between 30 October and 9 November, many Russians have decided to go on holiday. Resort hotels in Egypt – a popular destination for Russians – are reported to be fully booked, and Russian flights to Egypt are sold out.

The Russian news service Vesti reports some panic-buying because of the new restrictions. There has been a rush on meat and fish at the central market in Orenburg, a city in the Urals east of Moscow.