Police in Vaughan, Ontario have released a video showing a car racing through the interior of a mall in the search for two suspects accused of stealing items from an electronics store.

The incident happened around 1:10 a.m. Wednesday at the Vaughan Mills shopping mall in Vaughan, outside Toronto.

“The vehicle was then driven through the mall and into an electronics store where the suspects stole a quantity of items. The vehicle drove out of the mall through a second entrance,” York Regional Police said in a statement. “Fortunately, no one was injured.”

Video shows a black Audi sedan speeding through the mall’s parking lot before crashing through a set of glass doors at one of the building’s entrances.

A 2011 black Audi is seen racing through the inside of the Vaughan Mills mall in Ontario, Canada, on Feb. 1, 2023. (York Regional Police/LOCAL NEWS X/TMX)

Surveillance cameras from inside the mall then showed the car driving through its interior, past locked-up storefronts, kiosks and vending machines.

Five minutes later, cameras captured the car wrecking another entrance of the mall by driving through the glass doors.

Police believe there were two suspects inside the car, who stole items from an electronics store inside the mall in Vaughan, Ontario, which is just outside of Toronto. (York Regional Police/LOCAL NEWS X/TMX)

York Police said the vehicle – which had the Quebec license plate X10 SNP — later was recovered and that it is believed that two suspects were involved.

“Investigators are appealing for witnesses to come forward who may have been in the area at the time of the incident and have not yet spoken to police,” it added.

Taylor-Anna Kobinger, a resident of Laval, Quebec, about 350 miles away, told the CP24 news channel that her car was the one seen in the video.

The car eventually escaped the Vaughan Mills mall in Ontario by driving through another set of glass doors. (York Regional Police/LOCAL NEWS X/TMX)

The station reports that Kobinger listed the vehicle for sale on Facebook Marketplace in January in hopes of raising money for a down payment on a house.

But when a man responded to the listing and took it for a test drive with her, he started “driving very dangerously” and ultimately stole the vehicle when she got out of the car to change places, Kobinger told CP24.

Only in Canada. The clown is carrying a hockey goalie stick.

On August 15th at 3:38 a.m., a break-in occurred at a beer store vendor in Russell, Manitoba. Video surveillance caught two men entering the store and stealing cases of beer.

The first man was wearing mitts/gloves, a large coat, ball cap and had his face covered.

The second suspect that followed was dressed as a goalie.

However, he may have been a defenceman or forward in disguise as he was wearing jersey #17 – a non-traditional number for goalies.

He is described as having a medium build, wearing a blocker, trapper and carrying a goalie stick.

Anyone with information about this theft or has played against a goalie matching this description is asked to call Russell RCMP.

The best mobster nicknames were sometimes given by their peers, like Gaspipe or The Grim Reaper. Other times it was the press or even law enforcement who gave them names that they would always be known as, such as The Teflon Don, The Oddfather and The Lord High Executioner.

LUIGI MANOCCHIO, also known as “Baby Shacks,” “The Old Man,” and “the Professor”

BENJAMIN CASTELLAZZO, also known as “Benji,” “The Claw” and “the Fang”

While these nicknames are funny, we must remember these guys were, and are, mean cold-blooded killers.

This is what bravery looks like. Iranian women protesting for their human rights!

Iran’s president has vowed to take action against protesters after more than a week of anti-government demonstrations.

President Ebrahim Raisi pledged to “deal decisively” with the protests, which have now spread to most of Iran’s 31 provinces.

Officials say some 35 people have been killed since protests broke out over the death of Mahsa Amini in police custody.

Ms Amini had been detained for allegedly breaking headscarf rules. Officers reportedly beat her head with a baton and banged her head against one of their vehicles. The police have said there is no evidence of any mistreatment and that she suffered “sudden heart failure”.

And while Mr Raisi says her death will be investigated, his Interior Minister Ahmad Vahidi has insisted that Ms Amini was not beaten. 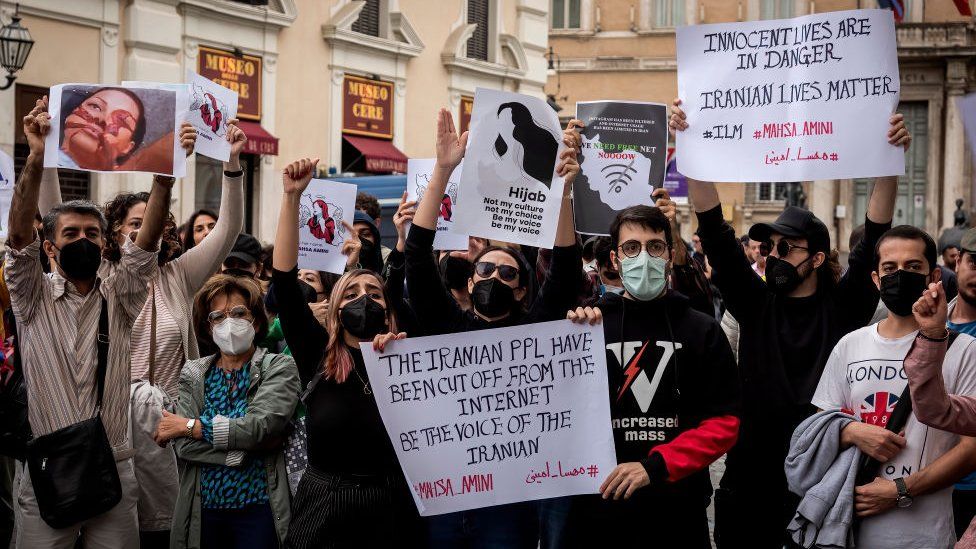 On Saturday people joined protests in several cities across the world including Rome, Athens and Stockholm

Indonesia’s anti-drugs agency is proposing to build a jail that will be surrounded by moats stocked with crocodiles and piranhas.

Indonesia’s drug tsar Budi Waseso said the animal guards would be better than human ones because they could not be bribed.

In November 2015, Indonesia bowed to international pressure and put a temporary halt on executing death row prisoners, so alternatives were sought by the authorities.

Wichita, Kansas — Marcus Johnson, a 33-year-old Wichita man was sentenced to 10 years in jail for crashing through Wichita’s City Hall. Investigators say he was angry because cop told him to turn down his car radio.

Johnson was sentenced to 122 months in jail after causing some $200,000 in damages when his vehicle burst through City Hall’s doors and continued through the facility.

According to police, Johnson became angered when a police officer told him to turn down the music in his car as he was parked at a convenience store.

In retaliation, Johnson drove his vehicle to downtown Wichita, pulled into the City Hall parking lot and drove right through the east-facing doors of the building. Investigators estimate Johnson was traveling at about 45 mph when his vehicle broke through the doors.

Surveillance video shows Johnson’s car as it broke through revolving doors, solid doors, through a hallway and into the west side security area. Security personnel were captured standing in the path of the car just moments before it crashed through. The vehicle destroyed thousands of dollars in computers and security equipment.

Johnson plead ‘no contest’ to criminal damage to property, battery on a law enforcement officer and two counts of criminal threat.

During sentencing, Johnson asked the judge for leniency, claiming he had been hearing voices in his head that night.

In a bizarre story out of Oklahoma, a man arrested for allegedly killing his friend during a fishing trip told police that the deadly incident came about in response to his companion summoning Bigfoot to attack him! According to a local media report, the very weird case occurred this past Saturday afternoon near the city of Ada as Larry Sanders and Jimmy Knighten were attempting to catch catfish in the South Canadian River by way of their bare hands using a technique known as ‘noodling.’ However, their day took a dark turn when the two fishing buddies got into a disagreement which ultimately left Knighten dead and Sanders pointing the finger at Sasquatch.

Responding to a report of a homicide that had unfolded at the river, police say that they arrived to find Sanders recounting his role in Knighten’s death to a family member. Upon being questioned by deputies at the scene, the noodler confessed to killing his friend by first striking him and then strangling him. As for why he did it, Sanders shockingly explained that “Knighten had summoned Bigfoot to come and kill him” and, in order to save his own life, the man concluded that he had to silence his companion before the proverbial call to action reached the hirsute ears of Sasquatch. In what might be the least surprising aspect of the case, police also observed that Sanders “appeared to be under the influence of something.”

While the misguided measure of self defense appears to have worked, since he was not killed by Bigfoot, Sanders was subsequently arrested for Knighton’s murder after police recovered the downed noodler’s body from the river the following day. Musing that the man’s forthcoming nature “makes it easier” to prosecute the case, Sheriff John Christian indicated that “you still have to prove all the elements of the crime, and that what the suspect is telling you is actually what happened.” Since it is unlikely that Sanders will be able to find Bigfoot to testify on his behalf, he’s likely facing an uphill legal battle in which, if he is found guilty, could ironically culminate with him facing the death penalty for the Sasquach-inspired slaying.

A huge drugs tunnel has been found running from Tijuana in Mexico to a warehouse in San Diego in the US.

With a length of 1,744ft (531m), the passage had a rail track, electricity and a ventilation system.

US authorities had been carrying out surveillance at a property previously used as a stash house for smuggling cocaine when they made the discovery.

They seized cocaine, methamphetamine and heroin. Six people are being held on drug-trafficking charges.

The US Attorney’s Office for the Southern District of California said the tunnel was 61ft (18m) deep and 4ft (1m) in diameter.

Prosecutors say that before the discovery, officers saw several vehicles come and go from the property in Tijuana and the warehouse on Friday 13 May.

They were then stopped and searched, the drugs were seized and arrests were made.

When officers entered the warehouse, the cross-border tunnel exit point was found carved out of the floor.

The suspects, aged between 31 and 55, could face a life sentence in prison and a $1m fine if found guilty.

“There is no more light at the end of this narco-tunnel,” said US Attorney Randy Grossman.

“We will take down every subterranean smuggling route we find to keep illicit drugs from reaching our streets and destroying our families and communities.” 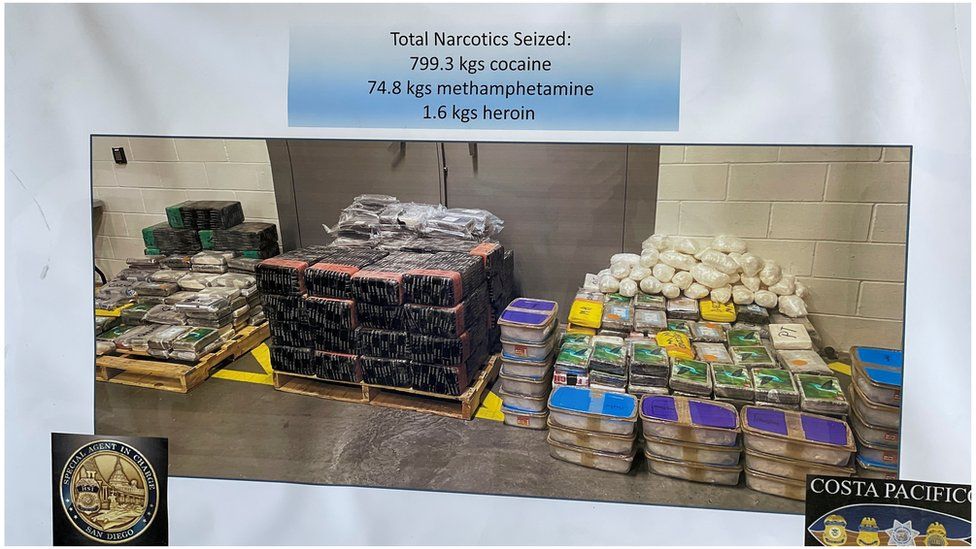 A picture of the drugs seized during this investigation