In 2020, Clarence Iron, Earl Wood, and John Chabot debuted calling for the NHL in Nêhiyawêwin (ᓀᐦᐃᔭᐍᐏᐣ; the Plains Cree language) during a Montreal Canadiens versus Carolina Hurricanes game. Building on their coverage beginning in 2019 of Rogers Hometown Hockey in Cree, APTN now hosts HNIC in Cree every Saturday night with announcer Clarence Iron calling alongside host Earl Wood and analysts John Chabot and Jason Chamakese. Although broadcasts in Nêhiyawêwin were postponed during the pandemic-shortened 2020-21 season, a large push for them to return ensured the return of consistent, weekly Plains Cree hockey coverage. The team behind Cree broadcasting is also working to translate hockey terms into the language, such as “slapshot” (ᓱᐦᑭᐸᑲᒥᐍᐸᐦᐍᐤ sohki-pakamiwepahwew), “faceoff” (ᓇᐸᑭᐘᓂᐢ napakiwanis), and “rink” (ᓱᓂᐢᑿᑕᐦᐃᑫᐏᑲᒥᐠ soniskwatahikewikamik).

I grew up in a rural area where the vocabulary of most people was about 2-300 real words. But those same people had at least 50-100 swear words under their belt ready to be spit out in a milliseconds notice. And what was better, where I grew up was a tri-lingual community, three languages, English, French and Flemish (Belgian Dutch). So we had the chance to be worldly swearers. We could be completely fluent in cuss words from three languages! It was fantastic. If you stubbed your toe you could swear for 10 minutes straight using Anglo-Franco-Flemingo cusses.

But he used Jesus’ name in vain. Some time in Purgatory Ned.

A few examples of alternative cussing:

Fudge Nuggets that woman has a nice Fish Pastel!

If that Shuzzbutt doesn’t shut his mouth, I’m going to make a mercrob out of his Shikaka!

Why doesn’t this NFL team trade that saffron Hobknocker!

How in the snookerdoodle am I going to get out of this Mothersmucker?

Son of a motherless goat! How the fudge berries did I fall for those cornnuts!

That is the ugliest fart knocker I have ever come across.

I’m going to rotate and tilt your jaw, then unscrew your Jehoshaphat!

**Please use with moderation.

Aussies slur their words and use only two-thirds of their mouth to speak because early settlers spent most of their days DRUNK, academic says

The Australian accent developed because so many early settlers were drunk and slurring, an Australian academic has claimed.

The first British arrivals to the country were such big drinkers that the distortion to their speech caused a verbal hangover that persists to this day, according to Dean Frenkel, a communications expert at Victoria University in Melbourne.

Proud Australians may be offended by the claim, which comes on top of the unavoidable truth that Australia began its modern life as a penal colony for our criminals.

But academic Mr Frenkel unashamedly wrote in Australian newspaper The Age: ‘Let’s get things straight about the origins of the Australian accent.

‘The Australian alphabet cocktail was spiked by alcohol.

‘Our forefathers regularly got drunk together and through their frequent interactions unknowingly added an alcoholic slur to our national speech patterns.

‘For the past two centuries, from generation to generation, drunken Aussie-speak continues to be taught by sober parents to their children.’

Bemoaning the still ‘slurred’ Australian accent, Mr Frenkel continued: ‘The average Australian speaks to just two thirds capacity – with one third of our articulator muscles always sedentary as if lying on the couch; and that’s just concerning articulation.

‘Missing consonants can include missing “t”s (Impordant), “l”s (Austraya) and “s”s (yesh), while many of our vowels are lazily transformed into other vowels, especially “a”s to “e”s (stending) and “i”s (New South Wyles) and “i”s to “oi”s (noight).’

Concluding with a call for Australians to improve their diction, the academic added: ‘It is time to take our beer goggles off.

‘Australia, it is no longer acceptable to be smarter than we sound.’

HISTORY OF THE AUSSIE ACCENT

1830 – By the end of the early Colonial settlement era major features of the accent, called ‘General Australian’, had developed, wi the country’s love of abbreviated words became part of everyday language

1850 – The Gold Rush leads to internal migration, spreading the general dialect around the continent

1880 – Extensive migration from England led to an emphasis on elocution and British vowels, which formed the Broad Australian dialect

1914 to 1918 – Australia’s national identity was galvanized during WWI with the creation of terms like Anzac and digger. Australians start to become proud of their accent.

1950 – In the second half of the 20th century, any emphasis on Broad Australian dwindled because of weakening ties with Britain and the General Australian accent became widely accepted as the national norm

1964 – The term Strine was coined to describe the country’s accent, which the majority of people continue to speak today

Previous accent theories have included suggestions that the Australian accent is a true reflection of the 18th and 19th century accents of British arrivals, while the American accent reflects the way 17th century early settlers from Britain spoke.

The suggestion has been that it is native English accents which have changed, while former colonies have clung to old ways of speaking.

Winston Churchill described the Australian accent as ‘the most brutal maltreatment ever inflicted upon the mother tongue.’

Barrack (for your team) — root (this one does give Australians a laugh. A warning for visiting Americans.)

Bogan – trailer trash (closest translation; but bogan can also be used self-depractingly; usually less of an insult than ‘trailer trash’).

CBD (Central Business District) — downtown. Australians will also say they are ‘going into town’ — meaning going into the centre of the town (the CBD).

Deb (debutante) ball (formal coming-of-age dance for girls [and boys] of a certain age; run by community organisations, such as a Masonic Lodge or Rotary — not specifically related to schools — with proceeds going to charity) — school prom (closest equivalent)

Footy — football (In Australia, what sort of football it is depends on where you are. In Tasmania, Victoria, southern NSW, SA, WA, & the NT it’ll probably be Aussie Rules [AFL]; in Qld and central & northern NSW it’ll be rugby (‘union’ or ‘league’), however soccer is also referred to as footy, and it’s increasingly played in primary schools, as well as professionally. Rugby has also sneaked into Victoria, but it only has a toe-hold.)

Freight (or postage) — shipping (in Australia, ‘shipping’ is only used when an actual ship is involved; postage is via the postal system, freight is via other carriers)

Hang around together — hang out together

Medicine — drugs (in Australia, when the general public talk about ‘drugs’ they’re referring to illegal drugs — only members of the medical profession refer to medicine as ‘drugs’)

Trolley (as in shopping trolley) — cart

Verandah (groundfloor; if it’s raised up, it’s a balcony) — porch

For emergency services in Australia, you dial 000 (triple zero), whereas it is 911 in the U.S. 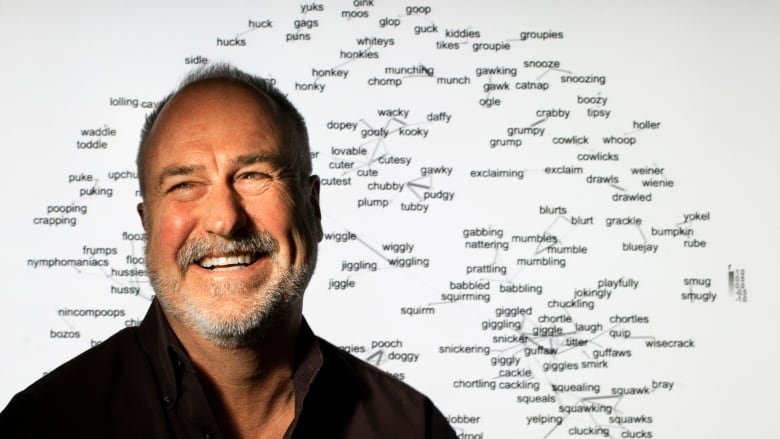 Science has determined through rigorous statistical analysis of 45,000 total words what the funniest words in the English language are, and some insights into why they make us giggle.

In fact, the word giggle, along with wriggly, squiffy and boobs are among the funniest words we know according to a new study by Chris Westbury, a psychologist at the University of Alberta. And there’s a big goofy list below of the funniest 200 words in English.  Some will make you slaphappy, others will make you upchuck, and one we can’t mention because you may get your knickers in a knot.

No, not you. We just wanted to get your attention so we could talk about the purpose of this study.

Westbury, who has an interest in the psychology of humour, wants to understand what it is about certain words that makes us laugh. The capacity to laugh is unique to us and higher primates, but only we have words.

The study is based on three theories of humour. One, called superiority humour, suggests we find humour from making fun of people. “You blockhead Charlie Brown” is an example.

A second theory of humour is incongruity theory, which suggests that less likely things are funnier than likely things. You are not expected to slobber, but when you do, people laugh.

The third theory is juxtaposition theory, and it suggests that people’s actions sometimes make us laugh. Who doesn’t find puking funny?

All three of these theories are reflected in a master list of 200 individual words that make us laugh the most. Don’t worry, we’re getting to them. 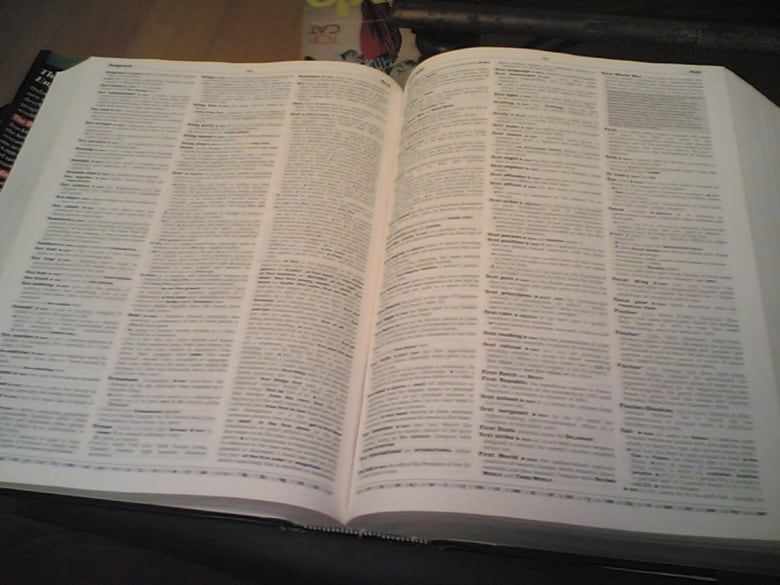 Of all the words in the English language, upchuck and slobbering are among the funniest. (David Singleton, Creative Commons Attribution 2.0 Generic)

One of the conclusions of the study is that there are two ways to predict whether a word will be funny or not: its meaning and its form.

Semantic predictors depend on the meaning of a word and the emotions evoked by that word. This measures how closely a word is — either in meaning or emotion — to the particular category is represents. The study found there were six categories of words that typically make us laugh: sex, bodily functions, insults, swear words, partying and animals.

From the sex category, boob and penis are classics. Bodily functions includes burp and snot; insults are words like ninny and buffoon; swear words are bullocks and jackass (among those we care to list); funny partying related words are booze and shindig; and humour in the animal list comes from pooch and critter.

Did we mention there are more in the list of the 200 funniest words at the end of this article? Keep scrolling … 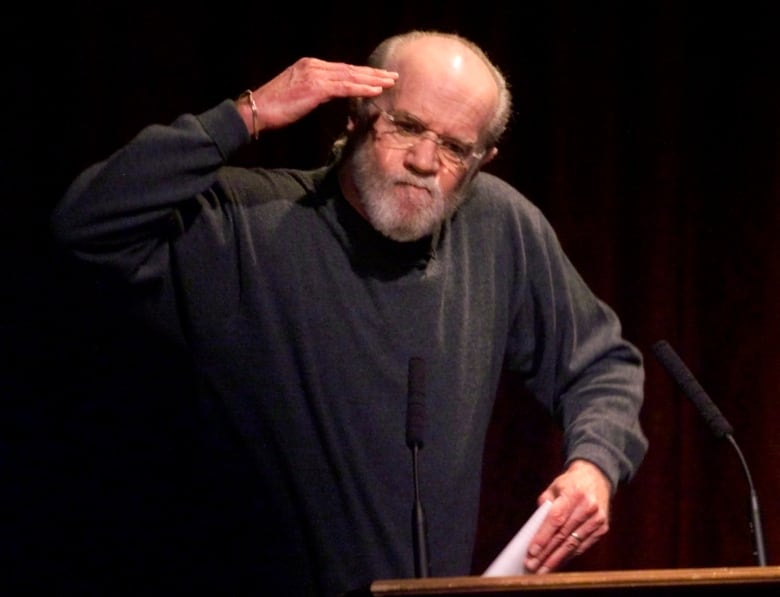 Many of comedian George Carlin’s seven words you can’t say on TV have characteristics similar to those on the funniest words list. But we can’t tell you what they are. (Gary C. Caskey/Reuters)

Dr. Westbury’s second predictor of funny words he calls “information predictors.” These have do do with the structure of a word or its form.

Words with fewer letters that occur less frequently in English were found to be funnier than words with more common letters. Similarly, less common words are funnier than common ones.

Also a few specific letters or sounds sometimes occur more frequently in funny words. For example the letter ‘k’ appears quite often in funny words: puke, fink, oink; as does the ‘oo’ sound, as in boob and poop. The letters ‘le’ at the end of a word is also often worth a giggle — or a wriggle or even a nibble.

(Warning: some of these words could be considered mildly offensive)

Below is a FedEx commercial from the 1980’s starring a speed talking actor.