In the late 1990’s, when a Texas farmer decided to clear up some new grazing land for his cattle by leaving up just enough trees to spell his name in giant letters, he probably never imagined that his signature would one day be used by NASA to evaluate the quality of their satellite cameras.

Jimmie Luecke was a young Texas state trooper who left the highway patrol in 1980 to try his luck in the oil business. He was lucky enough to do so during the chalk oil boom, became a millionaire, and invested most of his profits in land outside the town of Smithville. He started raising cattle on it, and by the late 1990’s his heard had gotten so large that he needed to clear up some more of his land of trees for grazing. Only he didn’t just settle for bulldozing all the trees, he decided to write his name in the process, thus creating the world’s largest signature. 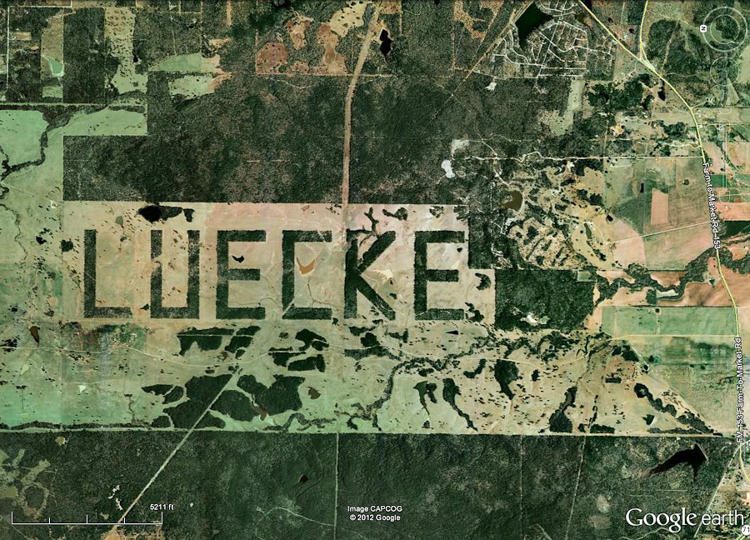 The name LUECKE, written out with trees, stretches about three miles on a plot of land near Buescher State Park, outside of Smithville. Each letter measures thousands of feet high, and there’s no doubt that Jimmie Luecke signed his name on his land out of simple egocentrism, but today his signature actually serves a purpose. A few years back, NASA revealed that the LUECKE signature provides a perfect target for astronauts “to estimate the maximum resolution of cameras aboard the space shuttle”. The strips of trees making up the letters also prevent soil erosion, although they don’t necessarily have to be shaped like letters that happen to spell out the land owner’s name… 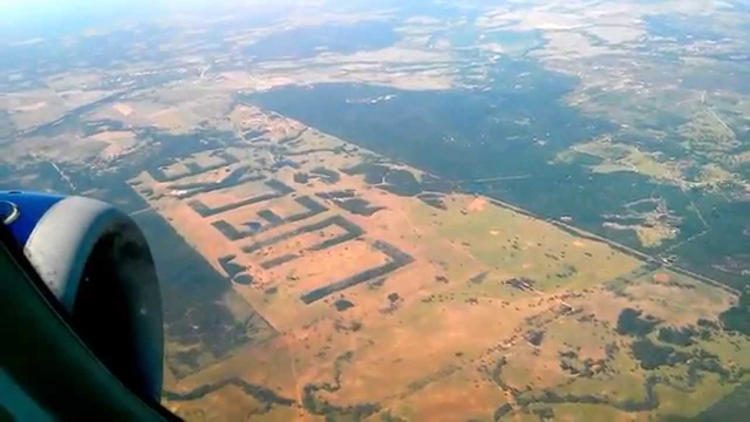 Luecke Farm is located directly along major flight paths, including most westbound flights out of Houston, which makes the world’s largest signature a very popular sight for people flying over it. And with the rise of Instagram, I wouldn’t be surprised if some people got on a plane just so they could snap a picture of Jimmy Luecke’s creation. 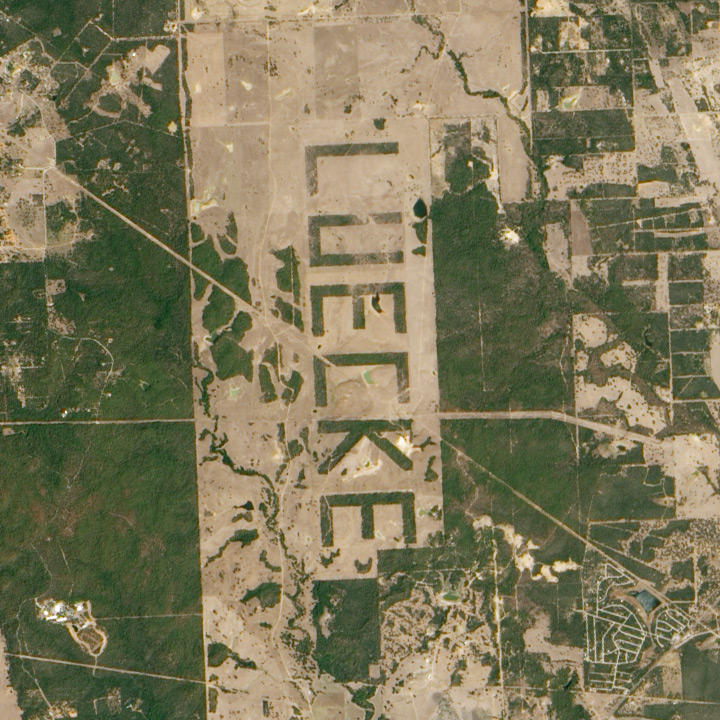 The Westerbork Synthesis Radio Telescope is scanning the skies

Strange radio signals from space are still baffling astronomers with their odd behaviour. Fast radio bursts (FRBs) are powerful blasts of radio waves that last just a few milliseconds. Some of these bursts have been seen to repeat, flickering on and off many times from the same point in space. They carry a huge amount of energy, but we don’t know what causes them.

The first repeating FRB, called FRB 121102 or R1, was discovered in 2012 and later traced to its host galaxy, a dwarf galaxy about three billion light years away. The second, nicknamed R2, wasn’t found until 2018.

Leon Oostrum at the Netherlands Institute for Radio Astronomy and his colleagues used the Westerbork Synthesis Radio Telescope (WSRT) in the Netherlands to watch R1 and R2 for 130 and 300 hours respectively, looking for more bursts that might help characterise them better and find R2’s host galaxy.

While they detected 30 bursts from R1, they didn’t see any from R2. The simplest explanation is that R2 isn’t detectable in the wavelengths at which WSRT observes, which are different from those used by the telescope which discovered it. It would be as if this FRB emits relatively red light, but WSRT can only see blue.

The other possible explanation Oostrum and his colleagues suggest is that R2 could have stopped emitting bursts. However, it is more likely that the telescope can’t detect the FRB’s wavelengths or that any bursts it emitted while Oostrum and his colleagues were observing were just too dim to see, says Jason Hessels, who is also at the Netherlands Institute for Radio Astronomy but wasn’t involved in this work. “Just because you don’t see anything at this time with this telescope doesn’t mean there’s nothing to see,” he says.

Regardless, it shows R1 and R2 are very different from one another. “If the two were similar, we should have seen that second repeater easily, and we didn’t,” says Oostrum. “They could be very different in how bright they are, how often they repeat, and basically any other parameters as well.”

They could also be in very different galaxies, as evidenced by new findings from a separate group led by Hessels. It traced a different repeating FRB called FRB 180916.J0158+65 to its host galaxy, only the fifth time any FRB has been tracked back and only the second repeater to be pinned down in this way.

Its galaxy is completely different from R1’s galaxy. It is a spiral more like our Milky Way instead of an irregularly-shaped dwarf galaxy. Its environment is also far less extreme, making some of the explanations for FRBs that came from analysis of R1 seem less likely.

“We’re in the situation where either a successful theory has to explain that diversity or we have to start thinking seriously about there being multiple different types of sources for FRBs,” says Hessels. If FRBs aren’t all the same but instead result from a variety of different types of events, that could explain why they all seem so different.

FRB 180916.J0158+65 is about six times closer to Earth than R1, so we will be able to observe it in more detail, and the next generation of huge telescopes should help explain FRBs too. “The main goal in the end is to find out what these things are, but for now, the more information we have, the more questions we have,” says Oostrum.

On February 7, 1984, Bruce McCandless became the first human to float free from any earthly anchor when he stepped out of the space shuttle Challenger and flew away from the ship. In a still-startling NASA image from that mission, untethered McCandless hangs 320 feet from Challenger, suspended above our impossibly blue planet and appearing paradoxically powerful and fragile against the yawning vastness of the cosmos.

But McCandless’s most memorable spacewalks, immortalized by a photo taken later during the mission, took place on his very first spaceflight. He’d been asked to test a new 300-pound Manned Maneuvering Unit, or MMU, which is basically a nitrogen-powered jetpack that allows astronauts to twist and turn through space as George Clooney’s character did in the movie Gravity. But this was no feature film, and to say that people were nervous about an unrecoverable malfunction is no overstatement.

All toilets at ISS Break Down, astronauts forced to use ‘diapers’

None of the toilets at the International Space Station (ISS) are working, astronauts have to use “diapers”, a NASA translation suggested Wednesday.

There are two toilets at the ISS, both Russian-made – one in the US module and another one in the Russian one.

In addition, there are toilets in Soyuz ships docked at the station but they are used when the ship is in flight and only rarely when it is docked.

According to ISS commander Luca Parmitano, the toilet in the US section constantly signals that it is not working, while the one in the Russian module is filled to the maximum.

Later on, an engineer of Space Center Houston told ISS Commander Luca Parmitano that a toilet in the US module was operational again.

WALLOPS ISLAND, Va. — A space cookie oven launched with rodents to space today (Nov. 2) aboard the most powerful Antares rocket ever built.

At 9:59 a.m. EDT (1359 GMT) this morning, the Cygnus NG-12 spacecraft successfully launched to the International Space Station from Virginia Space’s Mid-Atlantic Regional Spaceport at NASA’s Wallops Flight Facility. The launch carried about 8,200 lbs. (3,700 kilograms) of scientific experiments, hardware and supplies to the space station, where it will arrive on Monday (Nov. 4) to be grappled by NASA astronaut Jessica Meir who will be supported by fellow astronaut Christina Koch.

With nearly perfect weather, including brilliant blue skies and comfortably crisp air, the launch went off without a hitch. “This never gets trivial … the people that I work with day in and day out are all excited and look forward to this every time we get to do this,” Kirk Shireman, the deputy manager of the space station, said during a pre-launch press conference. This was the first launch as part of the second phase of the Commercial Resupply Services (CRS) flights. NASA awarded the contract for this second phase in 2016.

Aboard the Cygnus spacecraft is both equipment to support and sustain existing experiments on the space station as well as new investigations that will be introduced to the six astronauts currently on station.

Of the new investigations headed to space, there are a few that have particularly caught the public’s attention.

Another investigation, Microgravity as a Disruptor Of The 12-hour Circatidal Clock (Rodent Research-14) will use rodent models to study how phases of light and dark can affect liver health.