A floating orange ball over the famed US route has puzzled travellers for more than 100 years. And while most agree that the Hornet Spook Light exists, few agree on what causes it.

On a four-mile rural road eerily nicknamed the Devil’s Promenade, just off the old Route 66 in the north-east corner of Oklahoma, a paranormal mystery has puzzled spirit seekers for more than 100 years. The Hornet Spook Light – a mysterious, basketball-sized glowing orb named for the former town of Hornet – has been appearing in the night sky here since 1881. No-one knows what this peculiar, smouldering ball of light signifies, where it comes from or what it’s composed of. Even the Army Corps of Engineers have concluded that it’s a “mysterious light of unknown origin”.

It moves, spinning and bobbing up and down, like a lantern held by a dancing ghost, and is usually spotted from inside the Oklahoma border looking to the west.

As Route 66 historian Cheryl Eichar Jett, author of Route 66 in Kansas and founder of the annual Miles of Possibility Route 66 Conference, explained, “The Mother Road’s historical path through Joplin, Galena, Baxter Springs and then south to Quapaw, overlaps the Hornet Spook Light’s fame in the corners of Missouri, Kansas and Oklahoma, where those three states’ borders meet. And so, the legends and lore of the eerie light have become inextricably tied to the equally legendary highway.”

Drawn by the mystery like so many other Route 66 aficionados, I parked my car along the empty road in the still of a moonless night. I waited for over an hour in the darkness, and though the Spook Light never bounced in the distance, the lore I’d read magnified my expectation so much that a pair of passing headlights spooked me, if only for a second.

Local resident Vance Randolph documented his encounter with the phenomenon in his 1947 tome Ozark Magic and Folklore. “I have seen this light myself, on three occasions,” he wrote. “It first appeared about the size of an egg but varied until sometimes it looked as big as a washtub. I saw only a single glow, but other witnesses have seen it split into two, three or four smaller lights. The thing looked yellowish to me, but some observers describe it as red, green, blue, or even purple in colour. One man swore that it passed so close to him that he could plainly feel the heat, and a woman saw it burst like a bubble, scattering sparks in all directions.” 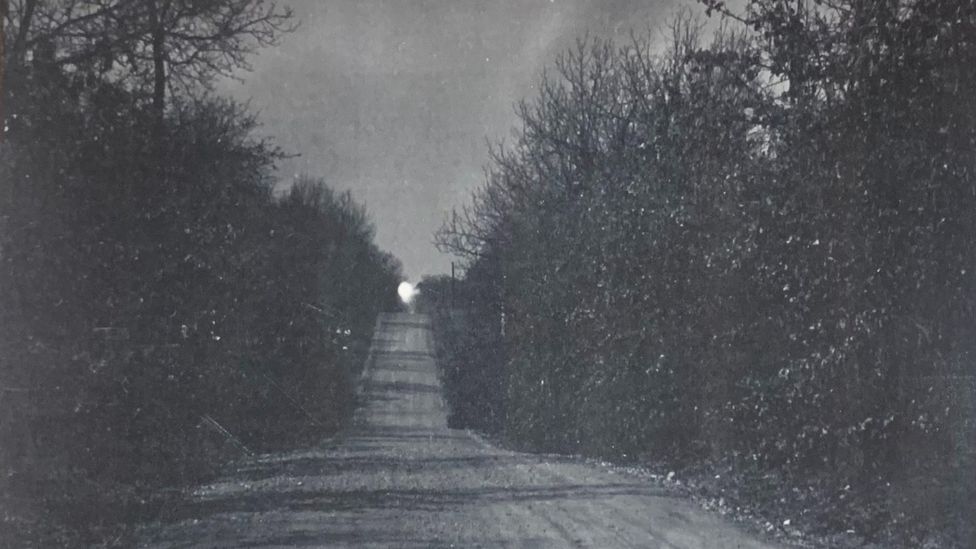 Dean “Crazylegs” Walker hails from Baxter Springs, Kansas, and was the inspiration behind the character of Tow-Mater in the Route 66-themed Cars film franchise. He volunteers at the Kansas Route 66 Visitors’ Center and recalls seeing the Spook Light at Devil’s Promenade on several occasions, starting with a first sighting at age eight. “My dad, mom and my uncle often took my cousins and me out to try to find the Hornet Spook Light,” he said. “Once, it even floated right through the front windshield of our car! My cousins and I crouched in the backseat, hiding from the light, until – poof! – it disappeared. We were all so spooked that no-one said a word ’til we got back to our home.”

Grace Goodeagle, an elder member of the Quapaw Nation, which is based in Quapaw, has a similar story: “One night, when I was about 10, my uncle drove my siblings and me to the Devil’s Promenade. Moments later, a glowing light appeared in the distance, deep in the woods. We weren’t afraid of it, though.” 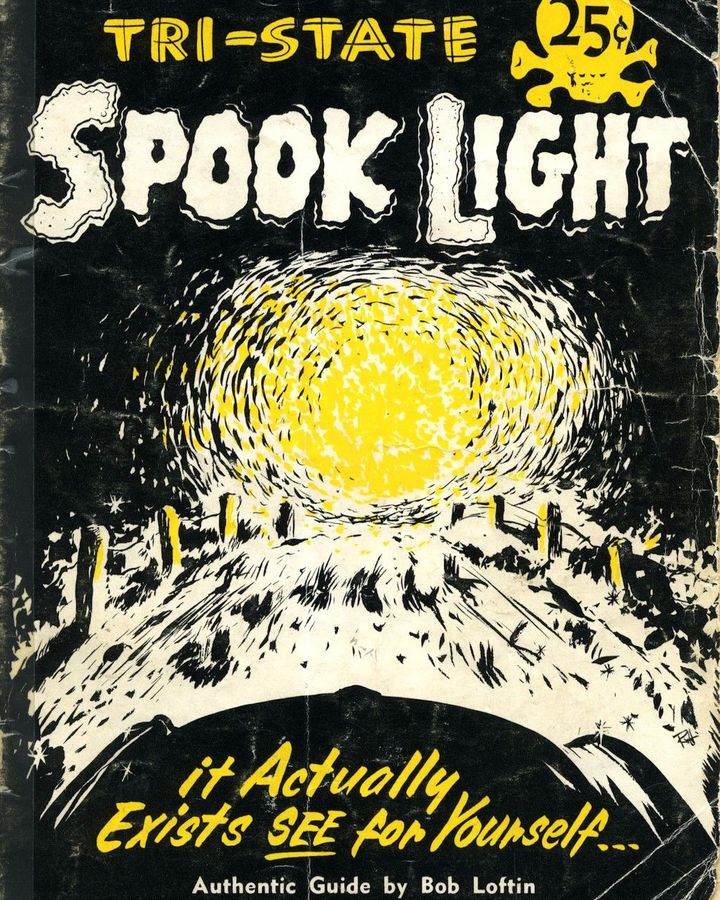 Spook Light chasers and fans have published booklets about the phenomenon, including this 1955 guide (Credit: Courtesy Joplin Historical & Mineral Museum)

While locals agree that the Hornet Spook Light indeed exists, few agree on what causes it.

In Vance’s book, he offered some theories of his era: some believed it to be the ghost of a murdered Osage chief; others said it was “the spirit of a Quapaw maiden who drowned herself in the river when her warrior was killed in battle”.

Goodeagle disputes those tall tales. “We must remember that our peoples are not native to this area,” she said. “The Quapaw peoples were forcibly removed from our ancestral home in the Mississippi valley beginning in 1830, after the enactment of the Indian Removal Act. The legends pointing towards ‘Indian spirits’ haunting this area are just that, legends. Our Nation believes in spirits, good and bad, but our family felt that the lights were simply due to nature, and not good or bad spirits, playing around with us.”

The first documented investigation into the Hornet Spook Light was undertaken by AB MacDonald, a reporter for the Kansas City Star, in January 1936. MacDonald judged that the mysterious lights were the headlights of cars driving east on Route 66.

Writer Robert Gannon concluded the same in a 1965 article in Popular Mechanics after conducting a test: he flashed his headlights on the adjacent highway at a specific time. His assistant, stationed on Devil’s Promenade, reported that the Hornet Spook Light appeared simultaneously.

“I doubt it was car headlights,” countered Goodeagle. “I won’t ever forget the experience. The light I saw bounced around and slowly approached my uncle’s truck. It simply did not appear to be automobile headlights from a distance in any way.”

“Some locals think the lights are caused by swamp gas,” she added. But Andrew George, associate professor of biology at Pittsburg State University in Kansas, disagrees. “The landscape around the Hornet Spook Light is unlikely to produce luminescent gasses, which are thought to cause similar phenomena elsewhere,” he explained. 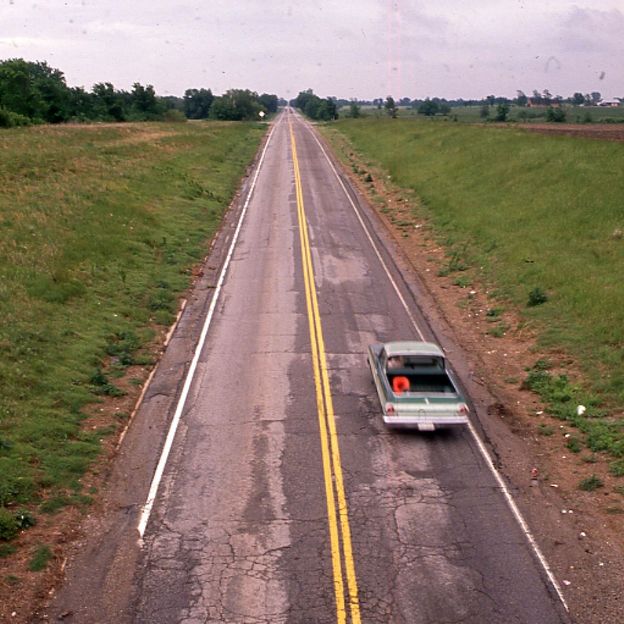 Though he has not tested it himself, George backs the headlights idea. “The Hornet Spook Light is almost certainly caused by vehicle headlights on the larger roads a few miles to the west,” he said. “The unusual appearance and movement of the light probably result from changes in air densities above the Spring River and the surrounding forests and fields. The light is refracted as it passes through the warmer and cooler air.”

Walker, like many locals, is not buying it. “No, it’s not car headlights,” he said. “It’s just too far from the turnpike. There is just no way.”