Rising global temperatures might be causing hailstorms to become more violent, with larger chunks of ice and more intense downpours. But just how big can a hailstone get?

It was the height of summer in the UK and the country found itself in the grip of a heatwave. In Leicestershire, in the midlands of England, children on their school holidays played in paddling pools to stay cool. Then the sky darkened.

In the early evening of 21 July 2021, hailstones the size of golf balls pelted suddenly from the sky, smashing windows and battering cars. Gardens that were a few moments earlier filled with people soaking up the evening sun, were left badly damaged by the downpour of ice.

While the hailstorm – caused by strong updrafts of cloud high in the atmosphere – was unusual in its severity, it was mild compared to a hailstorm that struck Calgary in Canada in June 2020. Hailstones the size of tennis balls caused damage to at least 70,000 homes and vehicles, destroyed crops and left the area facing a C$1.2bn (US$940m/£720m) repair bill. The 20-minute hailstorm was one of the country’s most costly weather events.

And climate change is altering the pattern of hailstorms. In Texas, Colorado and Alabama the records for largest hailstone have been broken in the last three years, reaching sizes of up to 16cm (6.2 inches) in diameter. In 2020, Tripoli, the capital of Libya, was struck by hailstones nearly 18cm (7.1in) across.

While giant hailstones – classed as those with a diameter greater than 10cm (3.9in) – are extremely rare, they are an indicator and hail damage in the US now averages more than $10bn (£7.6bn) a year.

But why might global warming be causing an increase in the amount of ice falling from the sky? And are their limits to just how big a hailstone can grow? 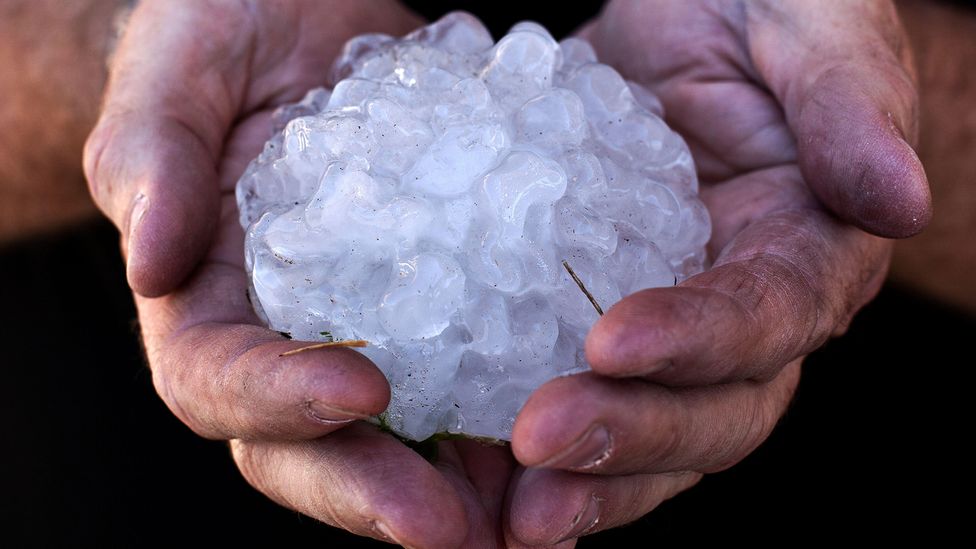 Some large hailstones form as smaller ones collide and fuse together as they are buffeted around in a storm (Credit: Nature Picture Library/Alamy)

Hail forms as droplets of water are carried upward into a thunderstorm. Updraughts carry them into parts of the atmosphere where the air is cold enough to freeze the droplets. Moisture from the air accumulates on the outside of the drops of ice as it moves through the air, causing the hailstone to grow in onion-like layers.

How fast a hailstone grows depends on the amount of moisture in the air. It will continue to grow until the updraught is no longer strong enough to keep it aloft. A 103km/h (64mph) updraft supports hail the size of a golf ball, while one 27% faster can create hailstones the size of baseballs, according to the US National Oceanic and Atmospheric Administration (although as we will see in a moment, the size of a hailstone doesn’t always directly relate to its weight). More humid air and more powerful updraughts will bring bigger hailstones. Often larger hailstones will fall closer to the updraught while smaller hailstones will fall further away, often blown there by cross winds.

Destructive storms that produce hailstones more than 25mm (1in) in diameter require a specific set of conditions, says Julian Brimelow, a physical sciences specialist at Environment and Climate Change Canada, a department of the Canadian government, who has studied how climate change affects hail formation. They require enough moisture, powerful updraughts, and a “trigger factor”, typically a weather front. This is why serious hailstorms are usually confined to particular regions such as the Great Plains in the US and Australia’s Gold Coast. Typically such regions have cool, dry air in the upper atmosphere above warm, humid surface air. This unstable situation leads to strong updraughts and the formation of thunderstorms.

Such locations are particularly prone to a type of thunderstorm known as supercells, which can produce very large hail due to the powerful rotating updraughts they create.

But as climate change alters the temperature of the Earth’s atmosphere, so too is the amount of moisture in the air. Warmer air can hold more water vapour while higher temperatures also mean more water is evaporated from the Earth’s surface. This is predicted to lead to heavier rainfall and more extreme storms in parts of the world. 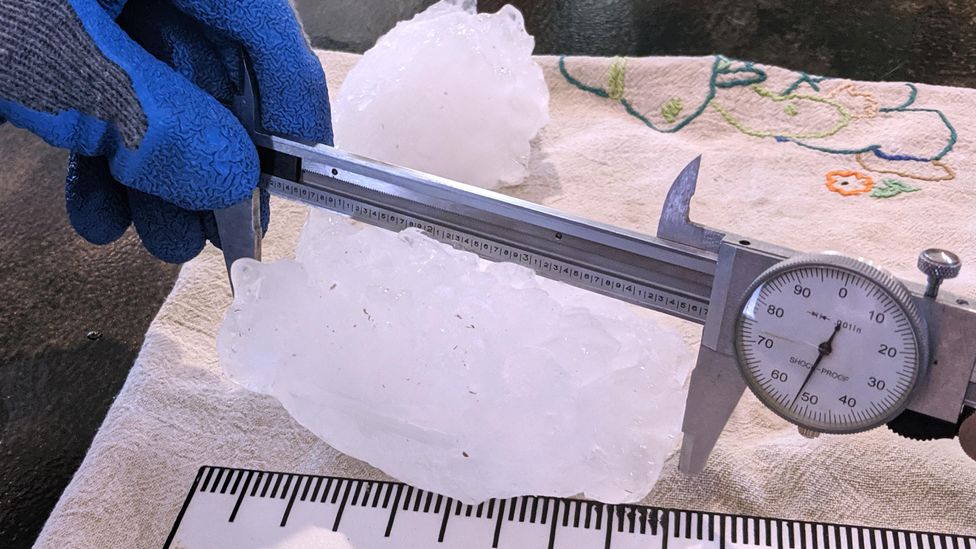 A hailstone measuring 4.83in (12cm) at its widest point was collected after a storm in Bethune, Colorado, US, in 2019 (Credit: National Weather Service, Goodland Forecast Office) 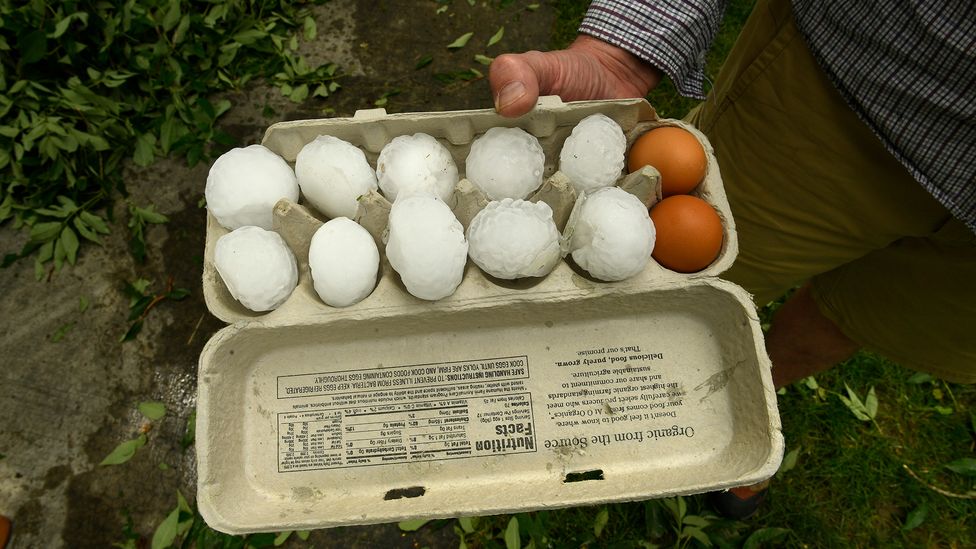 Hailstones as big as eggs – like these that fell in Louisville, Colorado, in 2018 – are not uncommon in severe storms (Credit: Helen H Richardson/The Denver Post/Getty Images) 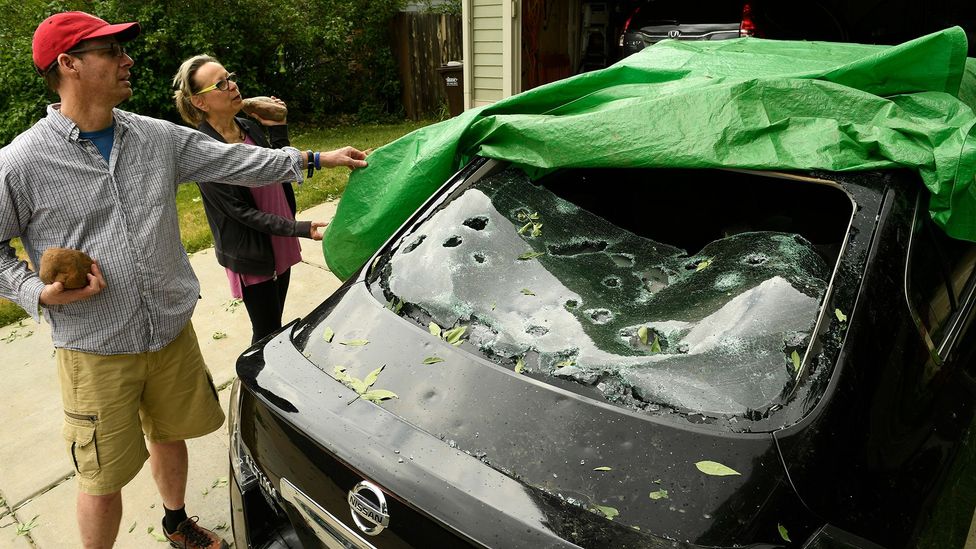