When the Second World broke out in Europe, and London became the prime bombing target, people began to pour into the platforms of the London Underground —the city’s subway system— every night to escape the nightly bombings of the 1940 London Blitz. As these underground sanctuaries became increasingly crowded, the British government decided to construct proper air raid shelters far below the ground. The idea was to build ten shelters and place them slightly below and near existing subway stations with the intention that these newly built tunnels will be eventually absorbed into the Underground once the war was over. 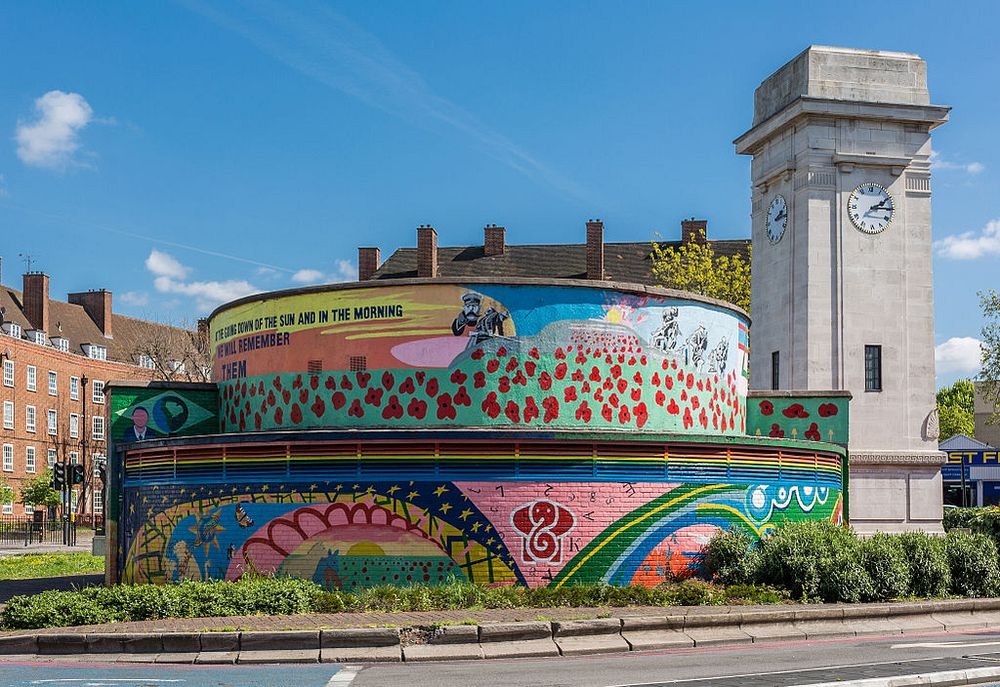 Work on the shelters began in November 1940. Each shelter consisted of a pair of parallel tunnels 16 feet 6 inches in diameter and 1,200 feet (370 m) long. Each tunnel was subdivided into two decks, fully equipped with bunks, medical posts, kitchens and sanitation. Above ground, each shelter’s shafts were protected by specially constructed ‘pill box’ buildings to prevent any bombs that directly hit the location from going underground. Each pill box housed lift machinery and provided the cover for spiral staircases down to the shelter’s tunnels.

Originally ten shelters were planned, but only eight got built —one each at Belsize Park, Camden Town, Goodge Street, Chancery Lane, Stockwell, Clapham North, Clapham Common, and Clapham South tube stations. The final capacity of each shelter was also reduced to 8,000 from the planned 10,000. 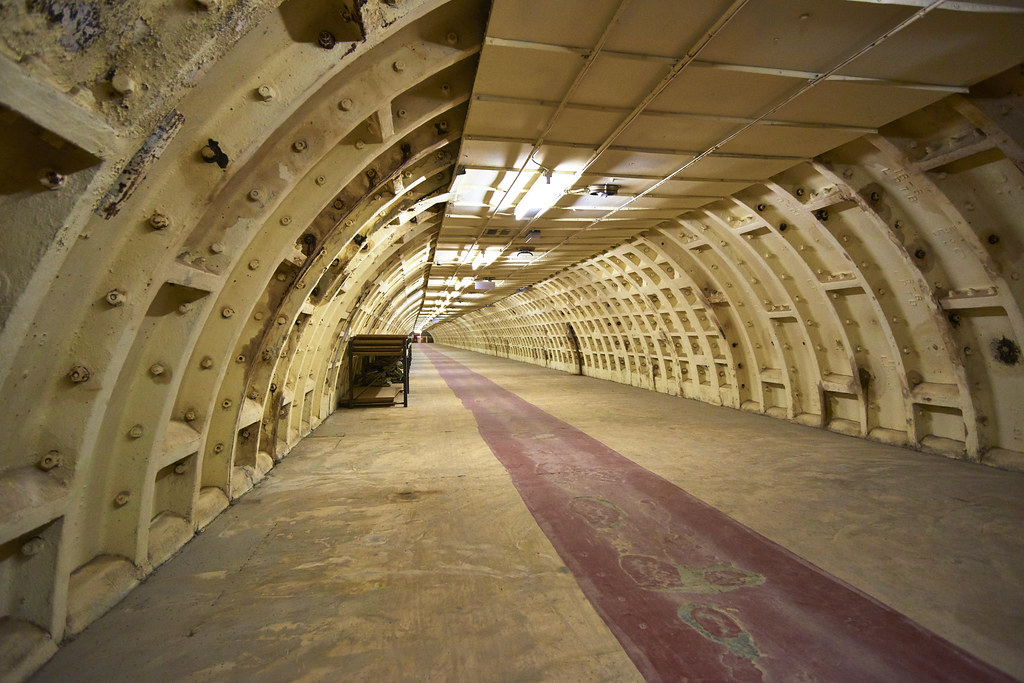 The arrival of the flying bombs, the V1 and the V2, finally moved the government to open the shelters to the public. Five of the shelters were opened and the remaining three continued to be used for various government use such as holding troops. Access to the shelters was controlled by tickets, but the demand was not high. The highest recorded nightly population was 12,297 on July 24, 1944, about one third of total capacity. After the scare of the flying bombs were over, the shelters closed once again and people returned back to the tube stations.

The shelters were used for their original purpose for less than a year. After the war, some of the shelters became temporary accommodation for the army in transit or were used as storage facilities. The Clapham South shelter used to house post-war immigrants from the West Indies. In 1951, it became the Festival Hotel providing cheap stay for visitors to the Festival of Britain. The Clapham North shelter is now a hydroponic farm and the rest are owned by Transport for London, and are still used for archival storage. The Clapham South shelter is now open for pre-booked tours arranged by the London Transport Museum. 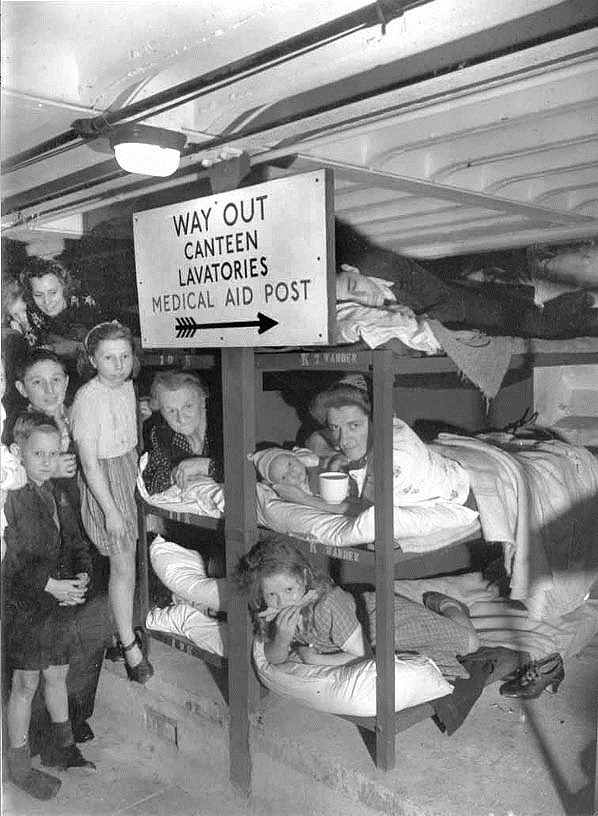 A busy night at Clapham South in July 1944, many of the original shelter signs are still in place today. 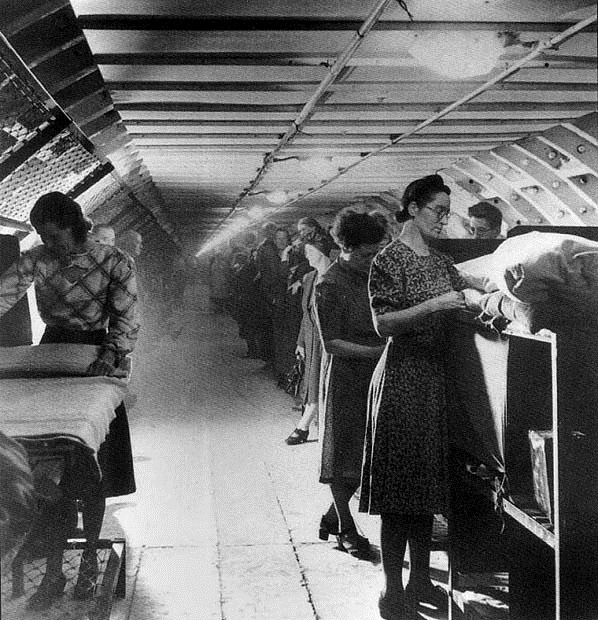 Wherever possible families were kept together in the shelter often utilizing the cross bunks where two pairs faced each other. Shelter residents are seen hear making up their bunks on the upper floor. 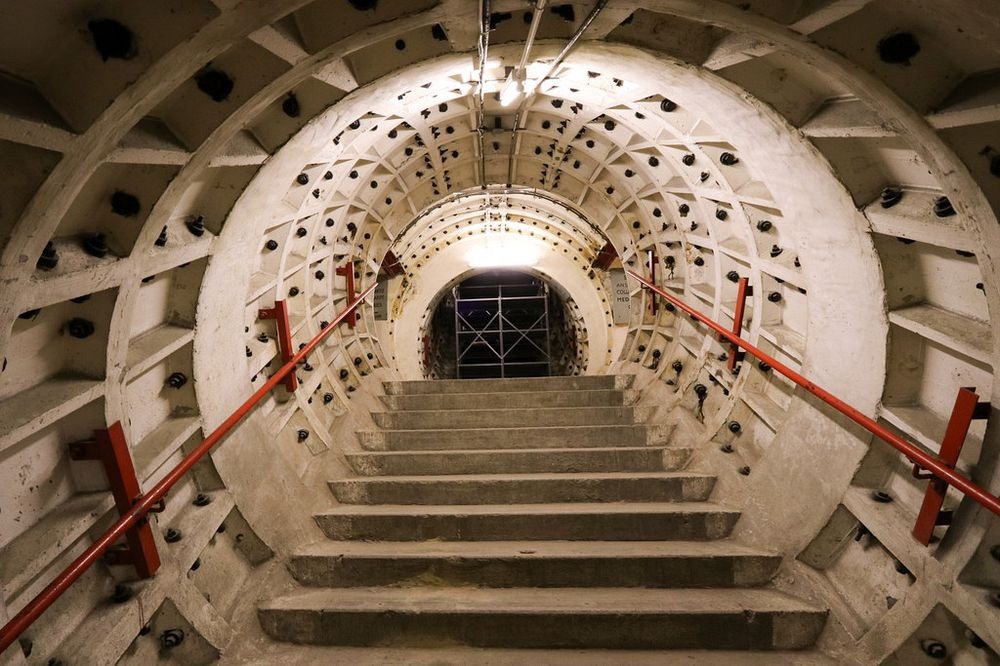 These stairs led to a tunnel connecting to Clapham South Tube station. It was built so that London Underground could connect the shelters and use them as part of an “express Northern Line” after the war. This never happened. 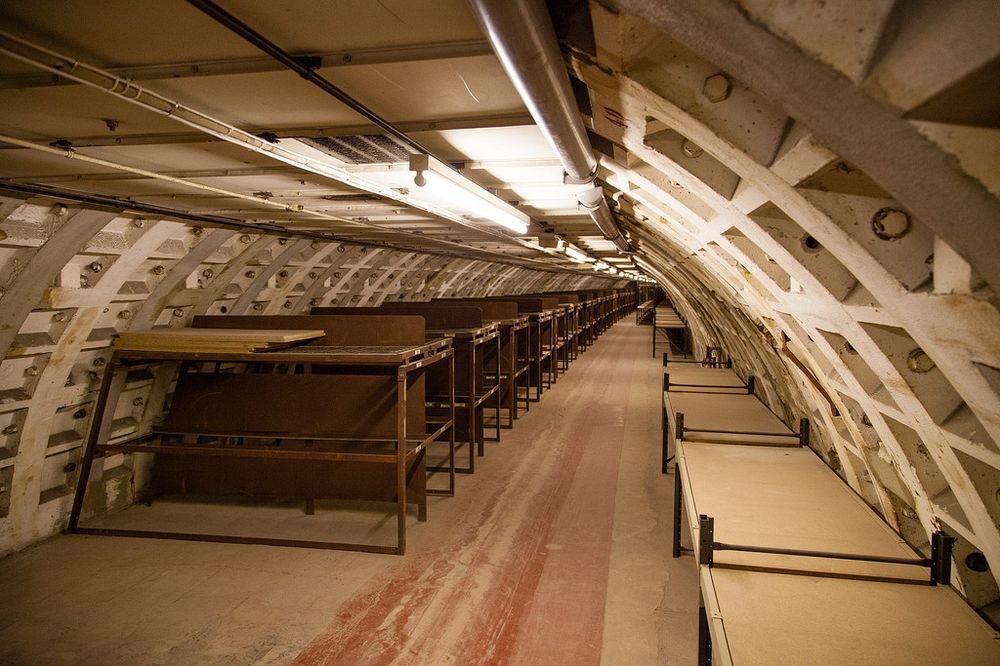 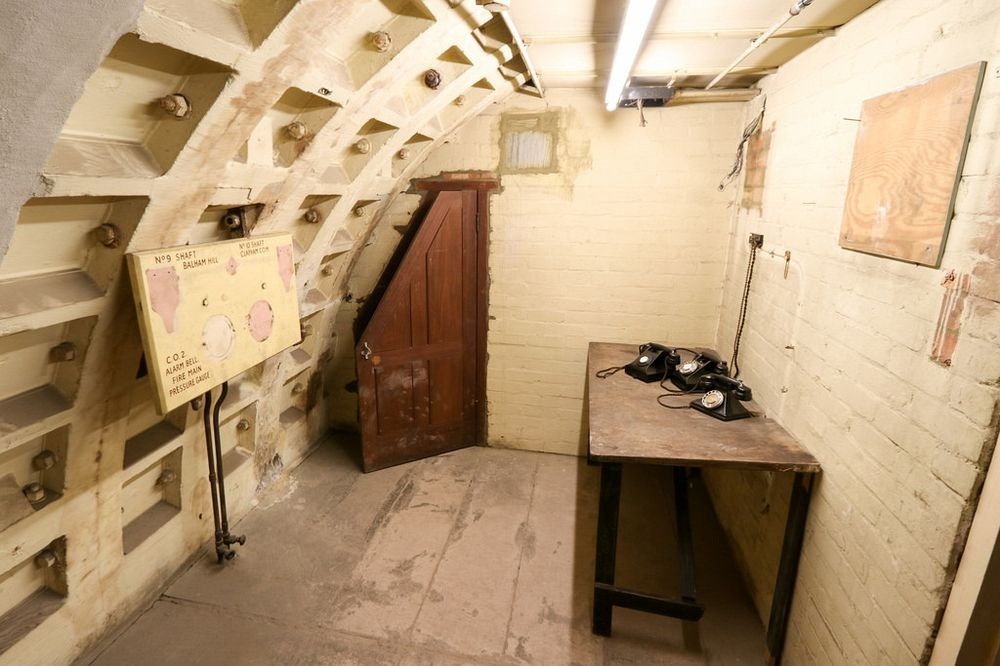 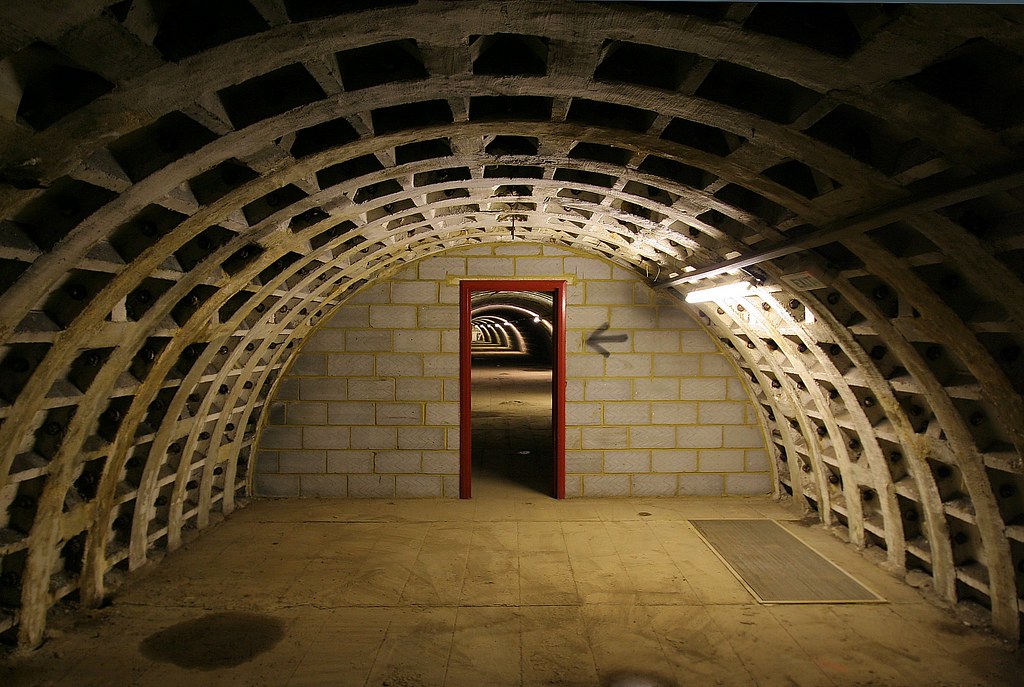 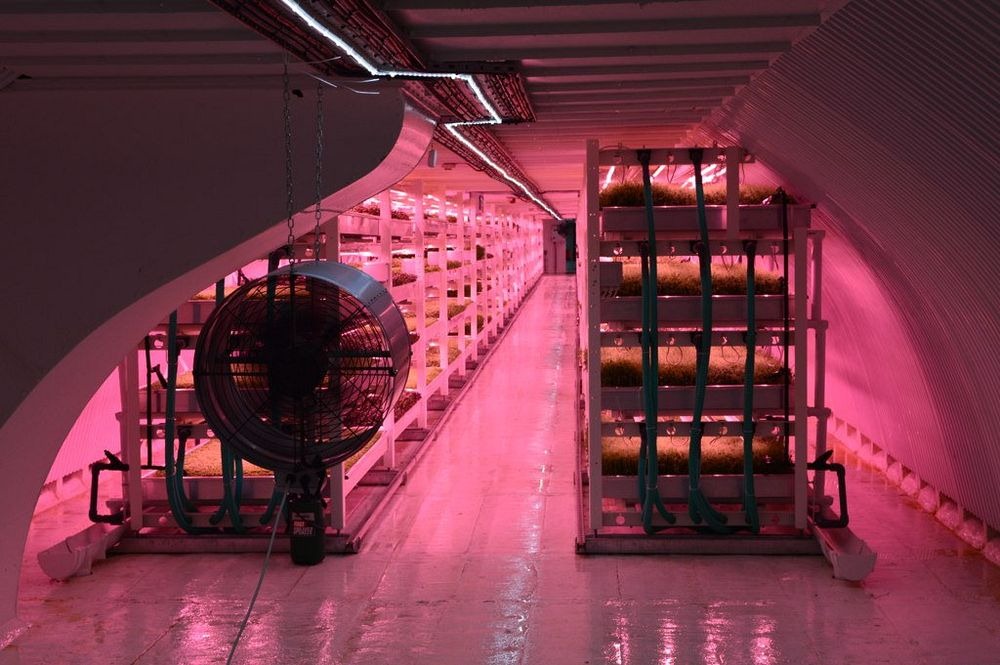 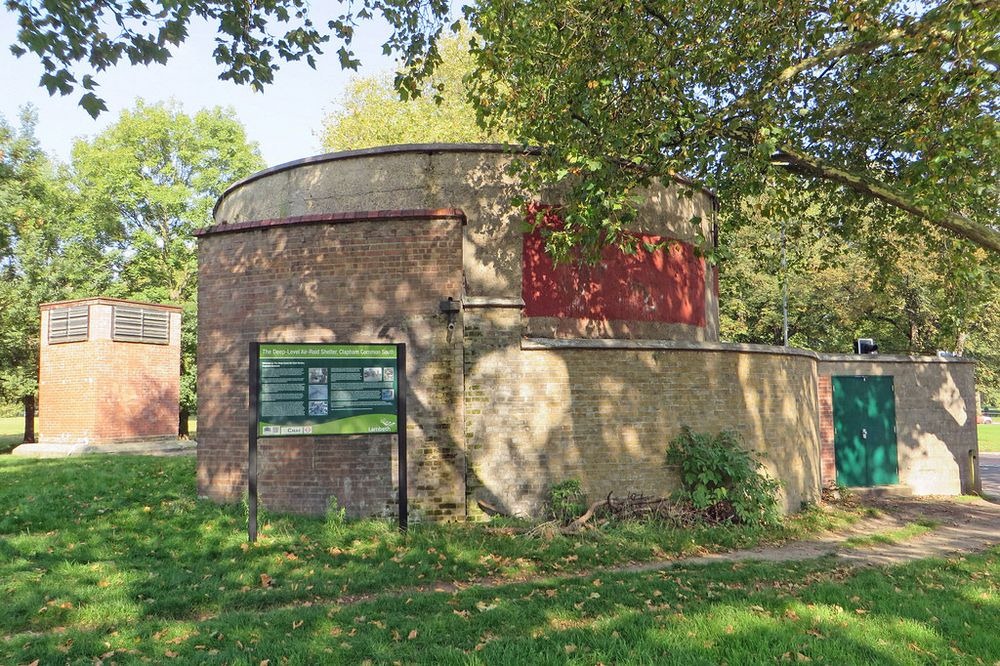