It is estimated that the earth’s surface is struck by about 500 meteorites a year, but only about 5 or 6 are large enough to be detected by weather radar instruments or their fragments recovered. Large collisions that leave discernable impact craters are thankfully, extremely rare events, that occur in intervals of thousands of years on average. For instance, stony asteroids of size 100 meter in diameter strike earth every 5,200 years on average. Such a collision would create a crater 1.2 km across and release energy equivalent to 3.8 mega-ton of TNT, or about a thousand times more powerful than the combined energy of both the Hiroshima and Nagasaki explosions. Larger collisions involving asteroids 1km in diameter are even rarer (every 500,000 years), and collisions with 5km objects are rarer still (once every twenty million years). The last known impact of an object of 10 km in size was the dinosaur killer that happened 66 million years ago. 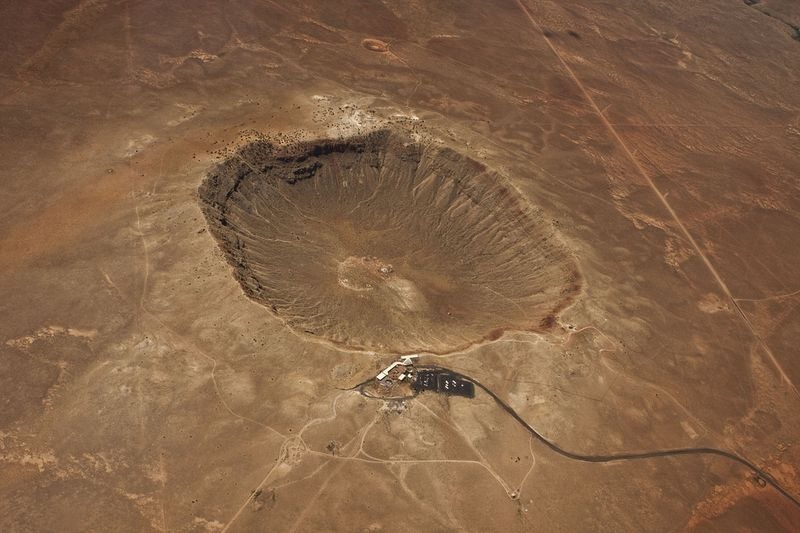 Barringer Crater in Arizona, the US, is the most famous impact crater.

To date there are 188 confirmed impact craters on earth, but most of them are barely recognizable. Only a handful of them have escaped erosion and weathering or show the classic features that result from a large meteorite striking the earth. Here are 16 impact craters that provide the most stunning visuals.

The Barringer Crater near Winslow in the northern Arizona desert of the United States, is not only the most beautiful and one of the best preserved impact craters on Earth, its discovery was a turning point in geological science. Before Daniel Barringer conclusively proved that the crater was created by a meteor impact and not by volcanism, geologists didn’t believe meteorites played any role in terrestrial geology. Even craters on the moon were attributed to volcanoes. Since Barringer’s discovery, numerous impact craters have been identified around the world. It is now widely accepted that meteor impacts have significantly shaped the earth’s geological and biological history — from the origin of water, extinction of dinosaurs to origin of life itself.

The Barringer crater is about 1,200 meters in diameter, 170 meters deep and is surrounded by a rim that rises 45 meter above the surrounding plains. It was formed 50,000 years ago. 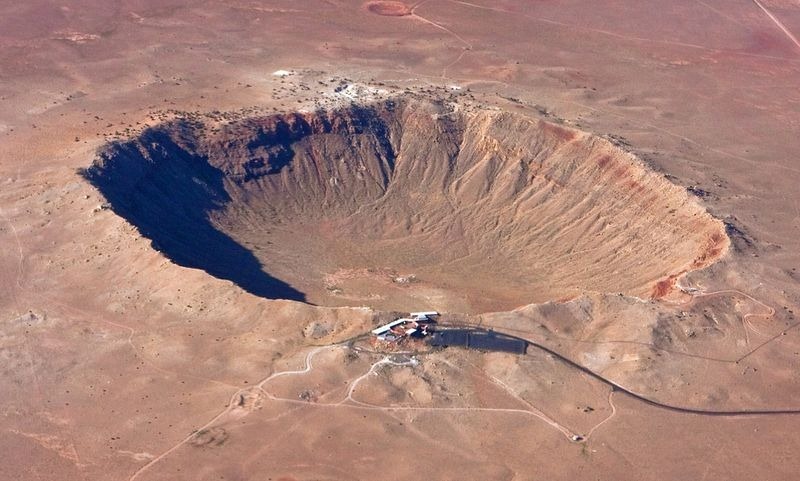 The Pingualuit Crater is located in Quebec, in Canada. It has a diameter of 3.44 km and was probably formed by an impact roughly 1.4 million years ago. The crater rises 160 meters above the surrounding tundra and is 400 meters deep. A 267 meters deep body of water fills the depression, forming one of the deepest lakes in North America. The lake also holds some of the purest fresh water in the world, and has great visibility at 35 meters. 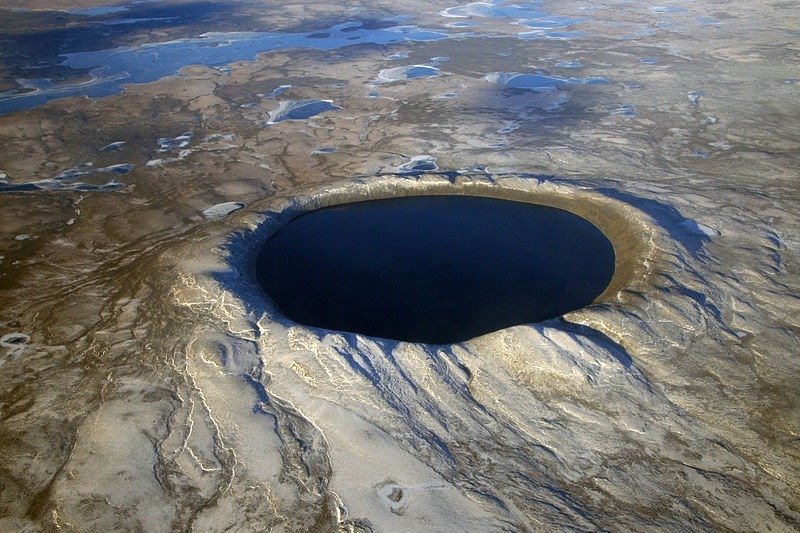 This well-preserved meteorite impact crater is located in the flat plains of the northeastern edge of the Great Sandy Desert in Western Australia, some 150 km south of the town of Halls Creek. It measures roughly 880 meters in diameter, and the mostly flat crater floor sits some 55 meters below the crater rim and some 25 meters below the sand plain outside of the crater. At the crater’s center, the ground rises slightly. Here grows some surprisingly large trees that draw moisture from the crater’s water reserves that remain after summer rains. 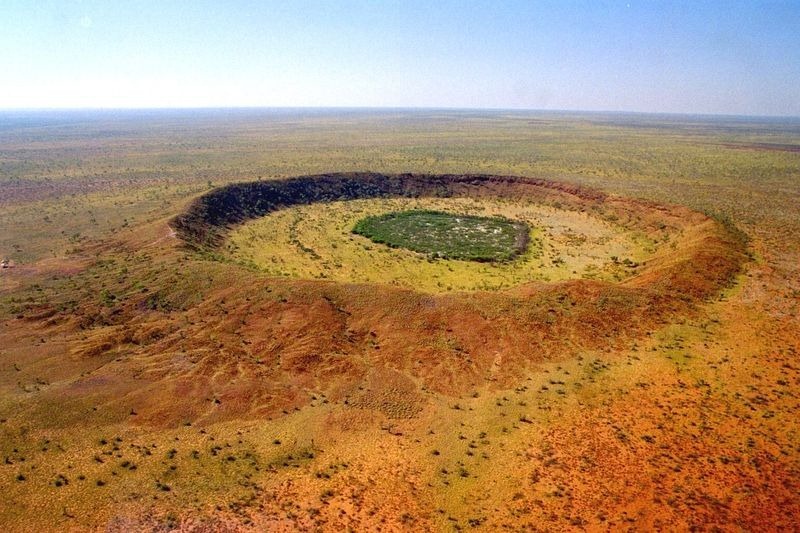 Amguid crater is located in a remote and inaccessible region of southwestern Algeria. The crater is about 500 meters across and 65 meters deep, but the actual depth has not been measured as the crater is partly filled with a wind blown sand. The central part of Amguid crater is flat and covered with aeolian silts. These silts refract the light due to which the crater appears white when viewed from space. 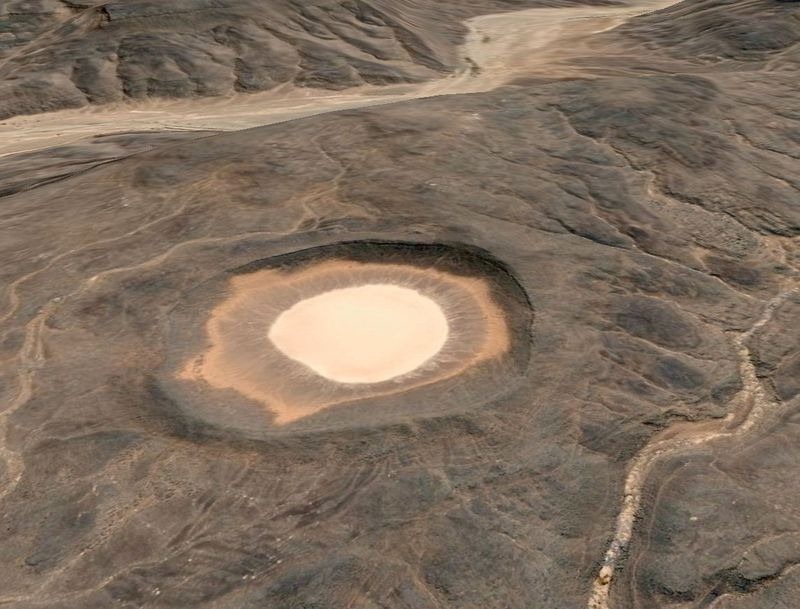 Lonar crater is located in a small Indian village of Lonar in Maharashtra. The crater was formed about 52,000 years ago when a gigantic chunk of rock crashed into this place creating a hole 1.8km wide and 150m deep. Over time perennial streams transformed the crater into a lake. 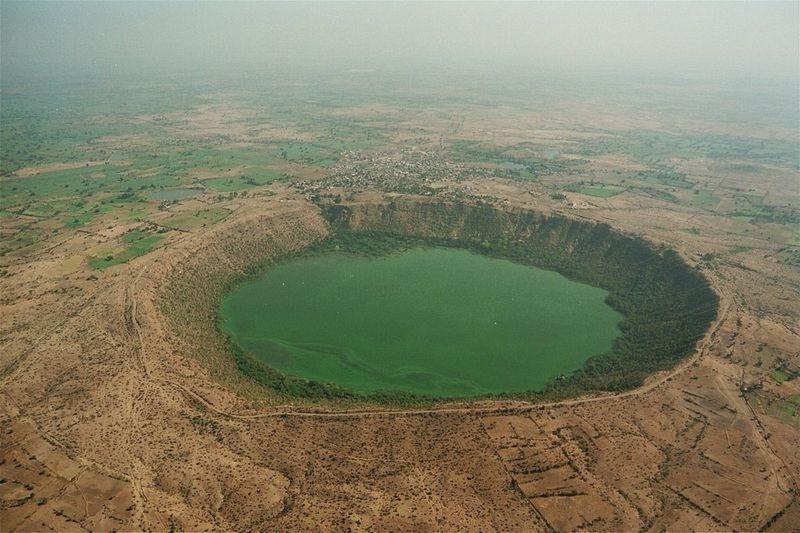 Gosse’s Bluff is located in the southern Northern Territory, near the center of Australia, about 175 km west of Alice Springs. The crater is thought to have formed by the impact of an asteroid or comet approximately 142 million years ago. The original crater rim was 22 km across but has been eroded away. The 180 meters high, 5 km diameter structure that is visible now is the eroded remains of the crater’s central uplift. 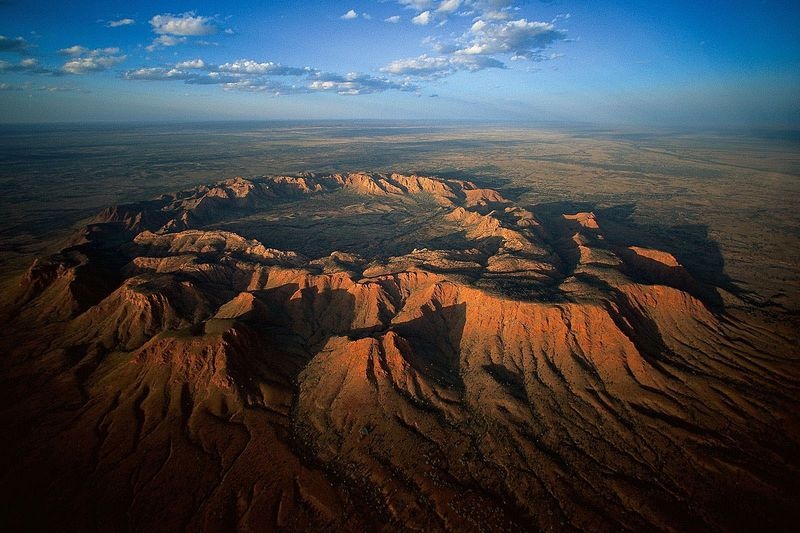 This crater is located Mauritania, in the western Sahara Desert. It’s a near perfect circle of diameter 1.9 km with a rim 100 meters high. The age of the crater is estimated to be between 10,000 and 30,000 years. 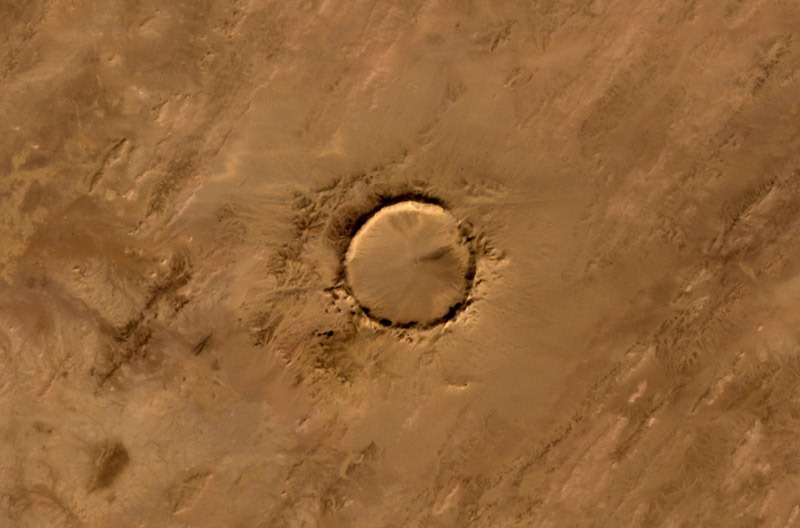 Tswaing crater is in South Africa, 40 km to the north-west of Pretoria. The crater is 1.13 km in diameter and 100 meters deep with an estimated age of 220,000 ± 52,000 years. Surface springs, ground water and rain water have filled the crater and turned it into a lake rich with dissolved carbonates and sodium chlorides which was harvested until 1956. 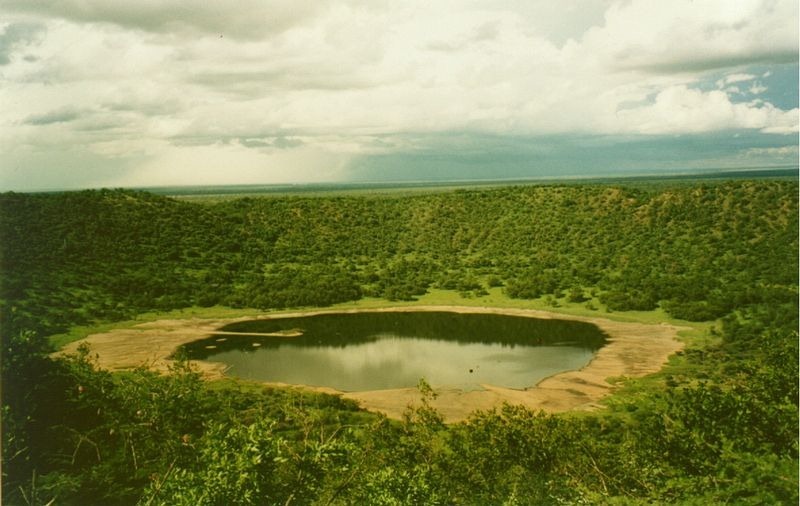 Roter Kamm in Namib Desert is 2.5 km in diameter and is 130 meters deep, but appears like a very shallow depression because the floor is covered with 100 meters of sand. It was formed between 4 and 5 million years ago. 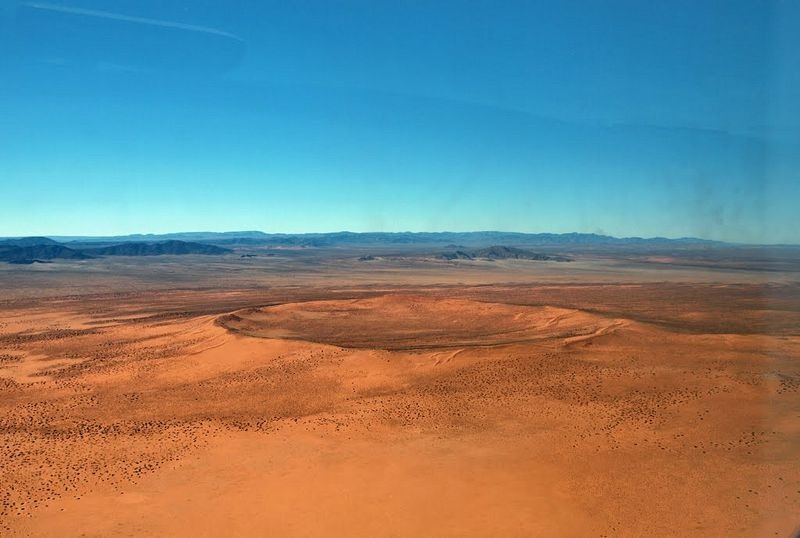 The Manicouagan Crater in Québec, Canada, is one of the oldest known impact craters and is the largest ‘visible’ impact crater on Earth. It is thought to have been caused by the impact of a 5 km diameter meteorite about 215.5 million years ago. The crater is a multiple-ring structure about 100 km across, with a 70 km diameter inner ring, which is now the Manicouagan Reservoir. 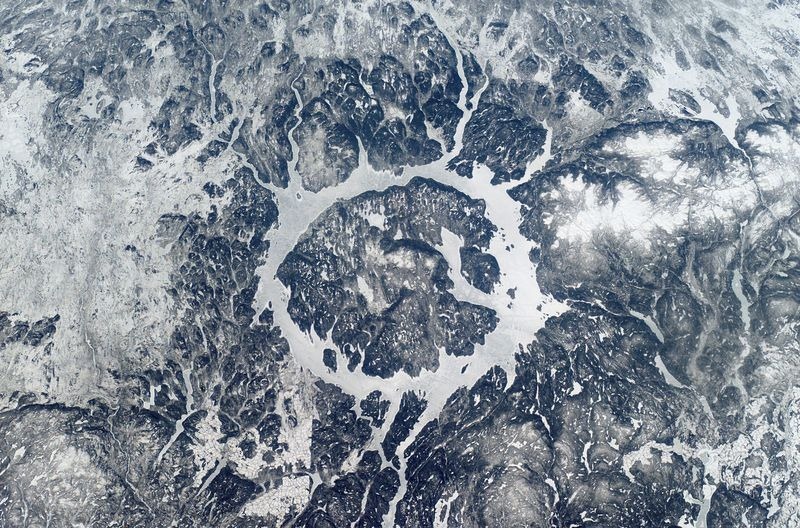 The Shoemaker crater is situated in arid central Western Australia, about 100 km north-northeast of Wiluna. The crater has a central circular region of uplifted Archaean Granite (Teague Granite) about 12 km in diameter, surrounded by a downwarped ring of sedimentary rocks with traces of a rim about 30 km in diameter. The age of the crater is uncertain. 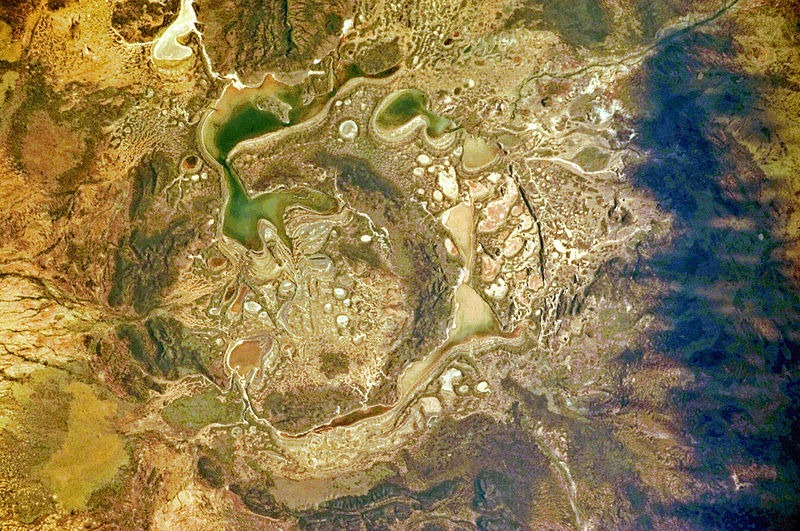