Developed during the 1980’s in Soviet Russia, the futuristic looking MD-160 Lun-class ekranoplan had been sitting unused at a Russian naval base since the late 1990’s, but has now been beached on the shores of the Caspian Sea, as part of a plan to turn it into an ocean-side tourist attraction.

Known as the Caspian Sea Monster, the giant ekranoplan was designed in 1975 by Rostislav Evgenievich Alexeyev, a prominent developer of of hydrofoil ships and ground effect vehicles. It used a cushion of air beneath its giant wings to hover at about 13 feet above water, making it hard to detect. It was built as part of the Soviet WIG program, which dated back to the 1960’s Cold War, and was the only Lun-class ekranoplan to ever be completed and equipped with supersonic missiles. 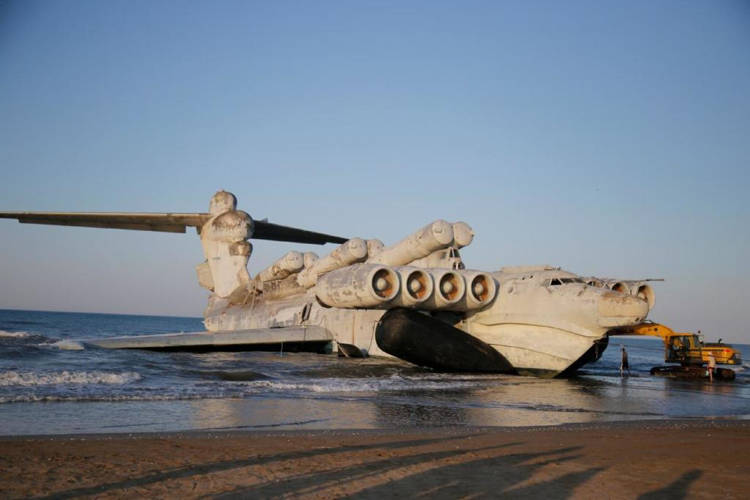 The experimental aircraft got its nickname from the CIA. When spy satellite photos revealed this giant airplane with “KM” stamped on the wings, they named it Kaspian Monster, not knowing that the letters actually stood for Korabl-Maket (Prototype Ship).

The MD-160 ekranoplan was retired in the late 1990’s and had been sitting abandoned in a Russian naval base ever since. On July 31, the vehicle was taken under tow for a move to Derbent, Dagestan, with plans to turn into a tourist attraction as part of a park. When it arrived, authorities realized that there was nowhere to put the giant aircraft, which dwarfs a 747 jet.

The one-of-a-kind ekranoplan has been beached on the shore of the Caspian Sea since August, despite several attempts by locals to pull it to dry land by hand.

It appears that the Caspian Sea Monster has once again been abandoned, at least for the moment, and there is the sad possibility that it will be pummeled to pieces by the waves. A tragic ending for one of the most visually-impressive aircrafts ever built.