Yunyang Longgang Scenic Spot in Chongqing, China, has become home to what is being referred to as the world’s scariest swing, which can catapult thrill-seekers over the edge of a nearly 700m-tall cliff, at speeds of up to 130km per hour.

The newly-unveiled super swing consists of a 100-meter-tall arch tower from which the swing’s metal cables are attached, and a 108-meter-tall launch tower which allows the swing to achieve mind-numbing speeds. With a swing diameter of up to 91.5 meters, the Yunyang Longgang Cliff Swing is said to offer a more thrilling experience than the famous Nevis Swing in Queenstown, New Zealand, or the Glenwood Canyon Cliff Swing in the United States. The new super-swing is currently undergoing additional safety inspections and is expected to open at the end of next month. 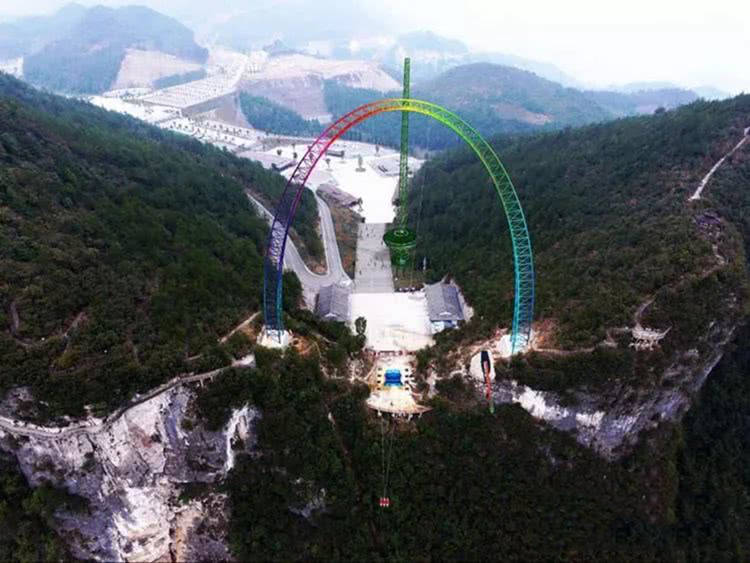 “To ensure the security of tourists, we used the structural steel of the world’s highest safety performance and applied advanced technologies such as seamless welding. It’s also anti-thunder and anti-electric and can withstand a magnitude 10 earthquakes and level 14 typhoons,” Li Pengfei, General Manager of Yunyang Tourism Development Co., Ltd, told iChongging, last year.

The arc of the swing reaches 90 degrees, 70 meters from the cliff under neat the seat. Up to three people can use the swing at a time; they will be strapped into the chair with safety harnesses, before being lifted into the air by a rope attached to the launch tower, from which they will be flung at blistering speed.

To experience the Yunyang Longgang Cliff Swing first-hand, you will have to travel to Chongqing and wait until June 30th, when the ride is expected to officially open.

I’d shit my pants just before my heart would blow out if I tried riding this thing.