Skip to content
HomeIt’s Time to ‘See Them Aliens’: The Area 51 Raid Is Underway

Big day today: Across the country, agitated swarms of concerned citizens have assembled to force the government’s hand on issues of immediate importance. To be clear: I’m not talking about the Global Climate Strike, although given the urgency of the goal there — hammer the must-act-yesterday nature of the climate crisis into diplomats’ brains ahead of the United Nations Climate Action Summit — I can see where you might think that. No, I’m talking about a strange happening unfolding in Nevada, where hundreds of extraterrestrial enthusiasts have descended upon a mysterious desert military base.

“Yes, friends, it’s finally time to “see them aliens.” The big Area 51 raid is happening now, and it looks every bit as unhinged as we ever could have hoped.

Area 51 raid? Sorry, huh?
Back in June, a California Man named Matty Roberts made what he thought would be a hilarious joke: a Facebook event inviting any and all interested parties to “storm Area 51” on September 20, because “they can’t stop all of us” from barging in if we “Naruto run” as a unit.

They,” in that equation, seemed to refer to the United States Air Force, which uses Area 51 as a base; “all of us” would appear to mean anyone who clicked attending, a digital army that quickly ballooned to roughly 2 million people. This was, as you might imagine, a more enthusiastic response than Roberts anticipated. “I waited for like three days and there were like 40 people and then it just completely took off out of nowhere,” Roberts told CNN affiliate KLAS-TV in July. “I was just like, the FBI’s going to show up at my house, and it got a little spooky from there.”

Because if you believe the rumors-slash-conspiracy-theories, Area 51 is where the government conducts tests on the bodies of dead aliens and on their wrecked flying machines. The government has classically gone out of its way to keep Area 51 off the public’s radar, which naturally only makes people more curious about what goes on in there.

Got it. So did people actually show up?

Oh hell yes, although not millions of them. CBS estimates turnout to be somewhere in the “hundreds,” basically a lot of people doing this:

The itinerary changed after Roberts realized his joke had taken on a life of its own. Instead of storming the base, the crowds would peaceably assemble for a music festival called “Alienstock” in nearby Rachel, Nevada, a tiny town with a single motel.

Roberts planned to put on the event with the help of his original co-host, Brock Daily, and a woman named Connie West. According to the New York Times, however, Roberts and Daily abandoned ship over concerns that Alienstock would turn out to be “FYREFEST 2.0,” and directed their followers to a Bud Light-sponsored event in Las Vegas instead. Still another gathering — Storm Area 51 Basecamp in nearby Hiko, Nevada — beckoned believers to two days of alien talks, starting today.

A guard and a dog showed up from inside of the gate of Area 51. #Area51 #StormArea51 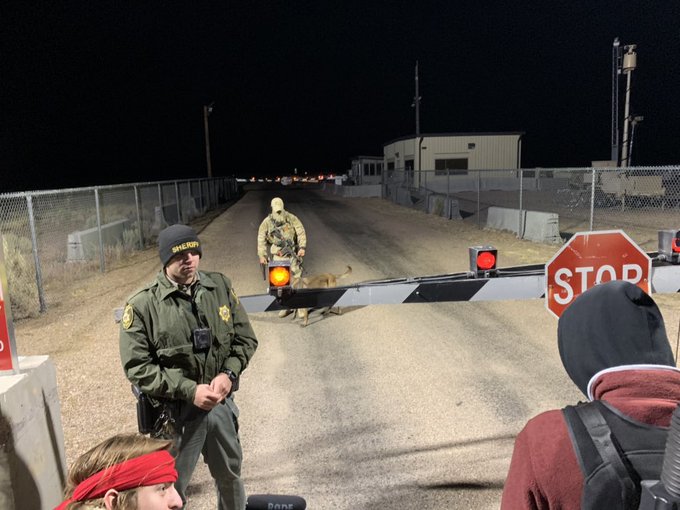