In the sport of hockey a goalie scoring a goal is extremely rare. This may have something to do with this goalie’s celebration.

The historic sets consist of 37 parts each, and there are fears the thieves may try to break them up.

Officials are still trying to establish exactly how much was stolen in the break-in early on Monday.

Saxony’s ruler, Augustus the Strong, created the collection in 1723 in what is one of the world’s oldest museums.

“Three out of 10 diamond sets have gone,” said Marion Ackermann, head of the Dresden state museums.

A forensic expert searches the area in front of the Royal Palace that houses the historic Green Vault in Dresden, Germany. (Sebastian Kahnert/dpa/AFP via Getty Images)

The stolen sets from the Green Vault (Grünes Gewölbe) are reported to also include some rubies, emeralds and sapphires.

How did the thieves get in?

The thieves – still on the run – removed part of an iron grille on a ground-floor window, then smashed the glass.

At about 05:00 (04:00 GMT) on Monday, firefighters were called to tackle a blaze in a nearby electricity junction box.

There is speculation that the fire disabled the museum’s alarm system. It put out some of the street lights.

Police are examining CCTV footage which shows two suspects in the dark. But more people may have been involved in the robbery.

A car found burning in Dresden early on Monday may have been the getaway vehicle used by the burglars, police say.

The museum had guards on duty at night, Ms Ackermann said.

Dozens of police cars are at the scene and the Green Vault in central Dresden is now shut.

What exactly was taken?

“Three out of 10 diamond sets have gone,” said Ms Ackermann.

However, Dresden police and museum officials did not provide any further details.

How much are the stolen jewels worth?

Ms Ackermann described them as “priceless – we can’t put a figure on it”.

“The items cannot be sold on the art market legally – they’re too well known,” she said.

Ms Ackermann stressed that the cultural value of the unique collection was far greater than its material value.

What is the Green Vault?

The collection is housed in eight ornate rooms in the Residenzschloss – a former royal palace.

Three rooms were destroyed by Allied bombing in World War Two, but after the war, the museum was restored to its previous glory.

It is called the Green Vault because some rooms were decorated with malachite-green paint.

The most valuable items are in the palace’s historic section on the ground floor.

There are about 3,000 items of jewellery and other treasures decorated with gold, silver, ivory and pearl. They include a figure of a moor studded with emeralds and a 648-carat sapphire – a royal gift from Russia’s Tsar Peter the Great.

One of the most valuable jewels is a 41-carat green diamond currently on show in New York.

The collection was founded by Augustus the Strong. He was Elector of Saxony (a German prince entitled to take part in the election of the emperor) and later king of Poland.

What has the reaction been?

Saxony’s minister-president, Michael Kretschmer, voiced outrage at the crime, saying “not only were the state art collections burgled, but the people of Saxony too”.

“The valuables housed in the Green Vault and Residenzschloss were acquired by people in the Saxony Free State with difficulty, over many centuries.” He said the collection was an integral part of Saxony’s history.

In 1966, France was able to use fusion fuel to boost plutonium implosion devices with the Rigel shot. Roger Dautry, a nuclear physicist, was selected by the CEA to lead the development effort to construct a two-stage weapon. France did not have the ability to produce the materials needed for a two-stage thermonuclear device at the time, so 151 tons of heavy water was purchased from Norway and an additional 168 tons from the United States. This heavy water went into nuclear reactors in 1967 to produce tritium needed for the device.

The announcement by France in the late 1960s to test a hydrogen bomb provoked the People’s Republic of China to conduct a full scale hydrogen bomb test of its own on June 17, 1967.

France was to test the new device as part of a 5 shot series conducted at the nuclear testing grounds in French Polynesia. The device weighed three tons and used a lithium deuteride secondary stage with a highly enriched uranium jacket primary.

Fangataufa was selected as the location of the shot due to its isolation in respect to the main base on Mururoa. The device was suspended from a large hydrogen filled balloon. It was detonated at 18:30:00.5 GMT with a 2.6 megaton yield at an altitude of 1800 feet. As a result of the successful detonation, France became the 5th thermonuclear nation.

This two year old chimpanzee called Do Do is showing off a motherly instinct to rival even the most maternal of mankind. They were photographed at Samut Prakan Crocodile Farm and Zoo on the outskirts of Bangkok, Thailand. The farm doesn’t just contain crocodiles. Monkeys and tigers also live there, alongside elephants, lions, horses and hippopotamuses. These adorable images reveal the close bond that has formed between chimpanzee and a two month old tiger cub called Aorn.

Well, it was, until a dog hopped in its owner’s running car, kicked it in reverse, drove in circles for an hour and smashed a neighbor’s mailbox before safely exiting the vehicle without so much as a scratch.
But Sabol didn’t know who was behind the wheel when she first spotted the car, whirling around the block like an inept student driver might.
“At first I thought I saw somebody backing up, but then they kept going, and I’m like, ‘OK, what’re they doing?'” she told CNN affiliate WPBF.
Then the cops came. And then the fire department. Authorities watched from a distance as the driving dog did donuts.
Finally, the vehicle hit a mailbox and some garbage cans, then slowed down.
Port St. Lucie police opened the door, and Sabol watched as a large black Labrador retriever hop out of the driver’s seat.
“‘OK, this is turning weird,'” she remembered thinking.

It turns out, the dog’s owner, who asked to remain anonymous, had left his car running in the street when the dog changed gears and didn’t stop driving for almost an hour, Port St. Lucie police said.
The community escaped injury save for the mailbox, which the dog’s owner promised to fix.
As for the pup, it’s impossible to know its thoughts behind the wheel. Did it jump at the chance for a joyride and a fleeting taste of freedom? Or was this all a harrowing accident as the dog felt all control slip through its paws?
Sabol, for one, was impressed.
“They should give that thing a license.”

Noah and the Ark.

Mount Thor, officially gazetted as Thor Peak, is a mountain with an elevation of 1,675 metres (5,495 ft) located in Auyuittuq National Park, on Baffin Island, Nunavut, Canada. The mountain is located 46 km (29 mi) northeast of Pangnirtung and features Earth’s greatest vertical drop of 1,250 m (4,101 ft), with the cliff overhanging at an average angle of 15 degrees from vertical. Despite its remoteness, this feature makes the mountain a popular rock climbing site. Camping is allowed, with the only official site being at the entrance to the Akshayuk Valley near Overlord Peak.

I don’t know about climbing it, maybe a parachute jump from the top.

Mount Thor is part of the Baffin Mountains which in turn form part of the Arctic Cordillera mountain range. The mountain is made of granite and is the most famous of Canada’s mountains named “Thor”. Despite the fact the mountain is in a remote area, it’s a popular destination for avid mountain climbers. Mount Thor was first climbed in 1965 during the Alpine Club of Canada by an expedition led by Pat Baird. In July 2006, the first successful longest rappel was set on Mount Thor by an American team. 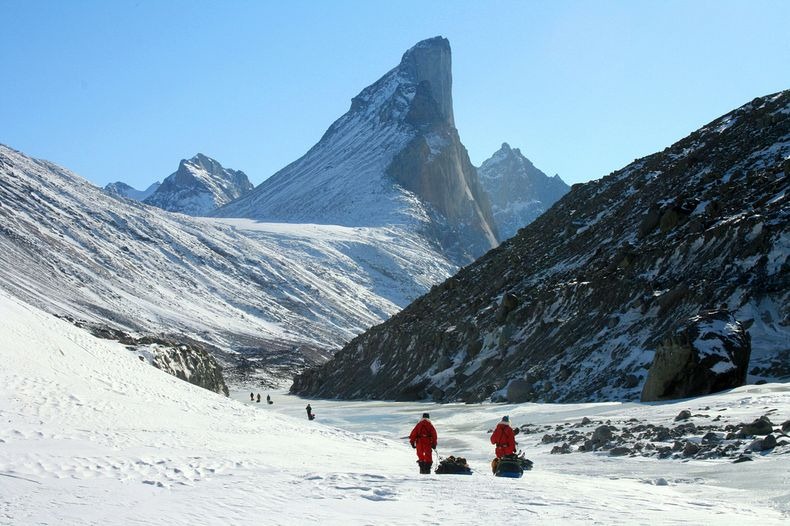 As I was waiting in line at a drug store the other day my eyes were drawn to the magazine stand. To my surprise there at the top of the stand was the National Enquirer.  I thought that old controversial tabloid had went out of business years ago. But the rag is still steaming off the presses. I guess certain people like to be entertained by reading made-up stories about the rich and famous.

A reliable source this tabloid is not.  Funny, it is that.  The Enquirer is one step above Weekly World News, the WWN writes about women having Bigfoot’s babies.  The Enquirer doesn’t go that far, but as the headlines below demonstrate, it does go far. It did report with a straight face that Jack Black was pregnant.  Escapism in a very harmless way I suppose.

I always had my doubts about Doctor Phil.

In 1926, William Griffin, a protégé of William Randolph Hearst, founded the paper as The New York Evening Enquirer, a Sunday afternoon broadsheet newspaper distributed throughout New York City, using money lent to Griffin by Hearst. As partial payment of his loan, Hearst asked Griffin to use the Enquirer as a proving ground for new ideas. Hearst took the ideas that worked in his successful publications; the less successful ideas stayed with the Enquirer, and as a result the Enquirer‘s sales never soared.

By 1952, the paper’s circulation had fallen to 17,000 copies a week and it was purchased by Generoso Pope Jr., the son of Generoso Pope, the founder of Il Progresso, New York’s Italian language daily newspaper. It has been alleged that Mafia boss Frank Costello provided Pope the money for the purchase in exchange for the Enquirer’s promise to list lottery numbers and to refrain from all mention of Mafia activities.

In 1953, Pope revamped the format from a broadsheet to a sensationalist tabloid focusing on sex and violence. The paper’s editorial content became so salacious that Griffin was forced by the Mayor to resign from the city’s Board of Higher Education in 1954. In 1957, Pope changed the name of the newspaper to The National Enquirer and changed its scope to national stories of sex and scandal. Pope worked tirelessly in the 1950s and 1960s to increase the circulation and broaden the tabloid’s appeal. In the late 1950s and through most of the 1960s, the Enquirer was known for its gory and unsettling headlines and stories such as: “I Cut Out Her Heart and Stomped on It” (Sept. 8, 1963) and “Mom Boiled Her Baby and Ate Her” (1962). At this time the paper was sold on newsstands and in drugstores only. Pope stated he got the idea for the format and these gory stories from seeing people congregate around auto accidents. By 1966, circulation had risen to one million.

The Enquirer must have secret agents in the heart of the medical establishment, as they always seem to know about the impending demise of celebrities.